Be afraid: The era of easy deepfake videos is upon us

A deepfake video of Bill Hader morphing into Tom Cruise and Seth Rogen has caused concern online of how the technology will infulence future news cycles. Video: Ctrl shift face 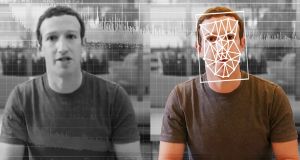 In a computer science lab in Dublin City University (DCU) students are busy at work. Take a closer look and you will realise they are creating deepfakes. This is not a secret project and they’re not afraid of getting caught by their lecturer because it is, in fact, a course assignment.

Deepfakes of comedian Bill Hader morphing into Tom Cruise and Al Pacino or ‘Mark Zuckerberg’ boasting about how Facebook owns its users, demonstrate how easy it is to use machine learning techniques to create realistic fake footage of people doing and saying things they never have. The technology is getting better and telling deepfakes from genuine footage is becoming increasingly difficult.

“In the worst-case scenario, experts say, deepfakes could be used to create audio and visuals of world leaders ordering military action, to justify starting wars and costing lives. The best-case scenario is that they make us distrust our own eyes and ears, something that has already begun,” says Cantillon.

So why are DCU students learning how to master deepfakes? The destructive potential of this form of sophisticated audio-visual manipulation makes fake news stories seem almost inconsequential.

Prof Alan Smeaton is the director of the INISGHT Centre for Data Analytics at DCU and he wants his students to create deepfakes because understanding how they are created is an important step is learning how to identify such footage.

“We’re generating deepfakes in order to be able to detect them. These Master’s students were tasked with creating a bare bones deepfake using their smartphones. It took almost a day of computing but only a couple of hours of programming,” explains Smeaton.

The students shot two sets of footage lasting only 30 seconds and sliced it up frame by frame using each frame as a picture to train the deep learning algorithm. Because the person in each video was sitting still, facing forward and had similar backgrounds it was relatively easy to deepfake one person’s face onto the other’s body.

But having hundreds if not thousands of images of an individual’s face and body from all sorts of angles and poses with a variety of facial expressions is the key to a successful deepfake. This is why celebrities make such good targets, says Smeaton.

“The first generation of these videos that emerged were of Nicholas Cage. You could say he became the Rick Astley of deepfakes,” he observes.

“So, you have thousands of images of Nicholas Cage or any celebrity and you use these to build your model. Then for every frame of the source video the original person is substituted, and the algorithm superimposes Cage’s face. A second algorithm checks this newly generated image to see if it would pass muster – is it realistic enough?

“There is a cold war of sorts between the generator and the second algorithm. It’s almost like a form of Darwinism: one is learning and the other is evaluating. We have two machine learning algorithms in a dual until they reach a Nash equilibrium.”

And this is getting easier to do as off-the-shelf projects like FakeApp, FaceSwap and Deep-Face Lab that are available online for anyone with a bit of patience and a decent graphics card. Head over to YouTube and the third most searched for term on deepfakes is ‘deepfake tutorial’.

If you’re not convinced that this technology can be adequately deceiving, the YouTube channel Ctrl Shift Face should be your next destination. They have clips of Keanu Reeves as Forest Gump, Tom Cruise as American Psycho, and Jim Carrey in The Shining.

But high-profile deepfake cases like Mark Zuckerberg, Barack Obama and Nicholas Cage are just a fraction of the examples that exist and more are being created every day, warn researchers Britt Paris and Joan Donovan in a recently published academic report titled Deepfakes and Cheap Fakes: the manipulation of audio and visual evidence.

“So far, news coverage and public discussion has paid the most attention to those cases that involve the imitation – whether virtual performance, face swap, or voice synthesis – of celebrities, politicians, and public figures,” the report notes.

“But as these techniques become more accessible, the risk of harm to private figures will increase, especially those who are politically, socially, or economically vulnerable.”

Deepfake detection and monitoring start-up Deeptrace reports that the number of these synthetic videos that are available online has almost doubled over the last seven months to 14,678. They also noted that non-consensual deepfake pornography accounted for 96 per cent of the total deepfake videos on the web.

“We also found that the top four websites dedicated to deepfake pornography received more than 134 million views on videos targeting hundreds of female celebrities worldwide. This significant viewership demonstrates a market for websites creating and hosting deepfake pornography, a trend that will continue to grow unless decisive action is taken,” said CEO and founder Giorgio Patrini.

With the potential to damage reputations, defraud individuals, and create convincing footage to further the agendas of those looking to tamper with elections, the rise of deepfakes is worrying and one wonders: is there anything that can be done to stop it?

With the 2020 US presidential election on the horizon, there is a fear that we are on the brink of an information apocalypse: social media users won’t know what to trust as they are exposed to a form of fake news 2.0 where fake news stories and digitally altered audio-visual content abound.

In anticipation, Twitter has just announced that it will be tackling deepfakes and all forms of what they refer to as synthetic and manipulated media (this includes ‘cheap fakes’ like the viral Nancy Pelosi video that was simply slowed down in order to make her speech appear slurred).

Twitter plans to flag tweets containing suspected deepfakes and warn users who attempt to share or like this kind of content. “In addition, if a Tweet including synthetic or manipulated media is misleading and could threaten someone’s physical safety or lead to other serious harm, we may remove it,” says Twitter’s vice-president of trust and safety, Del Harvey.

The social media company doesn’t specify how it plans to search for and detect deepfakes on its platform but there are an increasing amount of companies and organisations working on this. Smeaton and his research team in DCU are using an imaging technology known as order of magnification.

“Order of magnification is a technique that takes any kind of exposed skin in a video, like your face, for example – and it looks at pixel level changes in colour,” explains Smeaton.

“[Computers can differentiate between] 64,000 colours (16-bit), therefore slight changes in pink that cannot be seen by the human eye can be perceived by your smartphone camera. If we see a pixel colour change of maybe just two or three colours, we can magnify that by 100 or 200 times and it is possible to actually see the capillaries in the skin on your face pulsing with your heartbeat.

“These minute pixel changes as a result of your heartbeat are not present in deepfakes so we’re looking at that as a technique for detection because that order of magnification isn’t encoded in these videos.”

It is also important to note that this technology is not inherently bad. It might be associated with disinformation and fake celebrity pornography but it has the potential to transform our home entertainment experience as much as Netflix.

“If you look at the Ctrl Shift Face videos you can see the possibilities. Imagine you are a movie director and instead of getting actors to come in for a screen test you can simply use this generative media technology to see how they would look in the role,” suggests Smeaton.

“Or going beyond the choose-your-own-adventure element of Black Mirror’s Bandersnatch on Netflix, imagine you can choose your own actor for whatever film you’re watching.”

Another positive example is David Beckham’s video for the Malaria Must Die campaign. In the video Beckham speaks in flawless French, Arabic, Mandarin and five other languages to demonstrate the global fight for eradication of the disease.

“Although deepfake technology can indeed be used with malicious intent, the broadcasting and entertainment industries are on the cusp of revolutionary advancements through the application of innovative techniques that utilise these incredible new tools in positive and exciting ways,” says Max Kalmykov of tech consultancy firm DataArt in a recent post on the Hackernoon website.

While the misuse of machine learning technology for deepfakes is not to be taken lightly it is also exciting to think of the possibilities. Did you know that Al Pacino was originally offered the role of Han Solo in Star Wars? He turned it down because he thought the script was nonsensical. Now, thanks to deepfakes, just when he thought he was out, they can pull him back in.