Writing may be on the wall for Trump’s border wall 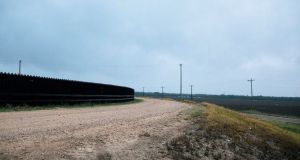 The border wall in Rio Grande Valley in Texas. Homemade, lightweight ladders are being made from the very same rebar rods supposedly reinforcing the integrity of the wall itself. Photograph: Alyssa Schukar/the New York Times

As we mark the 20th anniversary of the death of Abbie Hoffman, a radical, political activist and author of the 1971 anarchist’s manifesto Steal This Book, The Irish Times takes a look at how creative and innovative-thinking men, women and third-gender people crossing the US-Mexico border illegally have already found ways to successfully compromise completed sections of the “Rolls Royce” of border walls, something that would have likely made Hoffman smile.

I own a rare first edition of the 1971 dummies’ guide to subversion Steal This Book (forget your smoked salmon socialists, I’m an amuse-bouche anarchist.) Written while in prison in 1970, its author was one of the chief architects of anti-establishment protest politics in the 1960s and 1970s, advocating for a more militant approach to flower power.

The book is now an anachronistic relic, an outdated “how-to” manual for enemies of the state, with tips on everything from growing marijuana, to avoid paying taxes, as well as even more nefarious pursuits such as building homemade bombs.

It sold over a million copies in just a few short years, with at least as many nicked from the shelves of bookstores across America.

Some 50 years on, and it’s likely Hoffman would have not only been a very vocal supporter of anyone attempting to cross the US-Mexico border illegally, but he would have shared any wisdom he had on innovative ways to overcome Trump’s border wall, sections of which have already been completed.

Various US media outlets have done investigations into the robustness of the border wall, calling upon qualified engineers for their expert opinion as to its fortitude.

Ironically, many are critical of its height, believing the significant stature of the bollards (supposed to be one of its key defensive strengths) makes them easier to push aside once they have been cut from beneath and left dangling. They have already been proven right. After cutting through the base of a single bollard, smugglers have shown how easily they can push the steel out of the way, creating enough space for an adult to crawl through.

Exhibiting the same kind of logic more commonly associated with the politically incorrect “Kerryman” jokes so popular in 1980s Ireland – remember waterproof tea bags or inflatable dartboards? – border authorities in the US say one of the main advantages to building a penetrable fortress is that any damaged panels can be repaired or replaced easily.

Smugglers have also exploited this. It didn’t take long to figure out how to cut the bollards and return the severed sections to their original positions, disguising the breaches in the hope that they will go unnoticed and serve as future passages for illegal entry.

Agents say they are aware of this trick, and drive along the base of the structure looking for minor defects, testing the strength of compromised sections as they go by kicking the bollards with their boots. How scientific.

When damage is discovered welding crews are promptly sent to make fixes. Yet agents say the smugglers have returned to the same bollards and cut through the welds because the metal is softer, and the concrete at the core of the bollard has already been compromised.

The smugglers are even trying to trick border patrol agents by using putty that resembles the colour and texture of a weld, making a compromised bollard look intact.

This reporter remembers a comment his father made soon after Trump first suggested building a wall back in 2015. “The day they build a 10-foot wall on the Texan border, the 11-foot ladder business in Mexico will boom,” he only half joked.

My father is a wise man, but in this instance it wouldn’t take much between your ears to have seen this one coming. Reports from media on the west coast suggest human smugglers in the San Diego area don’t even bother with saws, opting instead to build makeshift ladders to scale the same barriers.

Homemade, lightweight ladders are being made from the very same rebar rods supposedly reinforcing the integrity of the border wall barriers. It turns out rebar is an ideal material for making ladders on the go. People can climb to the top of the barriers, some of which are as high as a three-storey building, and as soon as the first climber reaches the top, he/she uses hooks to hang rope ladders down to the ground on the other side.

Human beings adapt to changes in their environment. We have to. The alternative is mass extinction. In the majority of cases, though, we must adapt to a completely sea change in our environment – such as the irreversible environmental damage leading to global climate change, or even an issue less catastrophic as policing digital privacy and securing protection for each individual’s online data. There’s no contingency plan for tectonic shifts like these, but we will still learn how to overcome them.

The border wall, on the other hand, already looks like an obstacle that many of the solutions to it can be found in various chapters of Hoffman’s Steal This Book, written half a century ago.

Even if it were more difficult to overcome, we adapt. It’s instinctive. According to Joshua Wilson, a border patrol agent and union official in San Diego, the amounts of money being generated by drug smugglers and human smugglers is enough to keep the cartels in a position to continue doing R&D of their own, regardless of what future walls are made from.

“What happens any time some barrier is thrown up in front of a business is they adapt, and that’s all they’re trying to do,” he said.