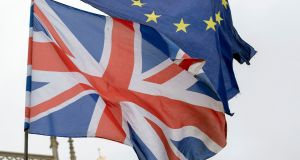 Confusion over trying to guess where Brexit is likely to dump us all serves to undermine the UK’s ability to attract talent. File photograph: Steve Parsons/PA Wire

A no-deal Brexit looks set to undermine the UK’s position as a world leader in international research and is already starting to cause damage according to a number of prominent scientists working in Britain. It is making it more difficult to recruit promising young scientists from abroad to adopt the UK as their research home and is already causing some scientists to leave including one Nobel prize winner.

The scientists were responding this month to the announcement by British prime minister Boris Johnson of a master plan that he said would bolster research and confirm the UK as a “global science superpower”. He delivered his proposals with much hand waving and overblown rhetoric live over his Facebook page from his office at Number 10 Downing Street. The centrepiece of the package was a new fast-track visa system to help attract the best international researchers. This is meant to replace the existing Tier 1 “exceptional talent” visa scheme, with a cheaper, simpler application process and a promise that family members accompanying a scientist would be able to work while in the UK.

Mindful that British science as it stands will suffer a terrible financial blow if it is cut off from the EU’s valuable Horizon 2020 research budget after October 31st, Johnson promised to make up any funding lost to scientists because of a no-deal crash out.

He did not venture how much funding might be available to cover these eventualities but the UK government already puts £1 billion a year into research across all areas. He also reminded those watching his address that he had already promised to put £1.1 billion into policing in the UK and another £1.8 billion into the National Health Service. His list of pre-Brexit promises is getting more and more expensive and many researchers do not believe the figures are credible.

There were plenty of commentators willing to respond to Johnson’s proposals, for example Sir Venki Ramakrishnan, president of the Royal Society, Sir Paul Nurse, director of the Francis Crick Institute, and Prof Dame Ann Dowling of the Royal Academy of Engineering to name a few. All welcomed any change to the Tier 1 visa programme, as this has been a point of contention over years. But most proved highly sceptical about whether current approaches have any value given the prospect of a no-deal crash out.

It was pointed out that the fact a deal had yet to be struck was already reducing Britain from a world science superpower to an also ran. While money is always welcome scientific research is a highly collaborative endeavour and the more internationalised the better. In today’s research environment a multidisciplinary approach was required with the scientists taking part being at varying points in their careers.

But confusion over trying to guess where Brexit is likely to dump us all serves to undermine the ability to attract the early stage high potential researcher, and also the seasoned experts that bring with them an existing research team and receive the highest funding from the European Research Council and other sources.

How will Britain retain the international mix of specialists that populate its research infrastructure? About half of all those working in UK science are from abroad. What will their status be after October 31st when there is no longer a legal right for them to receive a work visa as an EU country?

The top tier of international scientific research is perceived to exist as three main blocks, the US, the Far East and the European Union. Britain exists as one of the leaders in the European bloc but now it is seeking to disconnect from this long established and effective structure and just go it alone. That is simply not going to work if you cannot find new international entrants to UK science or coax in established research teams. Britain must allow full collaboration to exist if this is to work, but doubt hangs over the ability to achieve this.

The rot is already working its way into the UK system. University of Manchester researchers Andre Geim and Konstantin Novoselov shared the Nobel Prize in physics in 2010 for their discovery of graphene, sheets of carbon just one atom thick. Novoselov started considering his position once the UK voted in June 2016 to leave the EU. He and all the others working on the graphene including group leader Geim were non-UK nationals and funding for the graphene research had come from the EU. The discovery probably would not have been made but for EU programmes designed to bring major international research talent into member states. It works the other way too. Novoselov joined the National University of Singapore’s Centre for Advanced 2D Materials in 2019.

Astrophysicist Martin Rees summed it up well. “Far better to abort this misadventure and revoke article 50.”