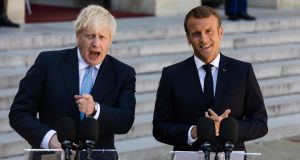 Consumer and business sentiment dropped to a new low as the threat of a no-deal Brexit inched closer, according to a new report from Bank of Ireland.

The bank’s “economic pulse” indicator, which combines the results of separate consumer and business indices, fell nearly four points to 79.1 in August.

This was more than 12 points lower than a year ago and reflects the current edgy environment.

With Boris Johnson taking up office as UK prime minister and raising the stakes on the Brexit front, and the Central Bank here publishing estimates of the damage a no-deal departure would potentially do to the Irish economy in the short term, the mood among households and firms was gloomier this month and the economic pulse hit a new low, the bank said.

With Brexit uncertainty fraying nerves, households have further scaled back their assessment of the economy’s prospects, the bank said. The buying mood was also softer in August despite the summer sales, it said.

The lender’s “business pulse” also fell three points to 79.9 with fears of a no-deal Brexit tempering the general mood.

Bank of Ireland chief economist Loretta O’Sullivan said: “The economic pulse headed south again in August and sentiment could remain ropey for a while yet given the unsettled Brexit backdrop.”

“At the time of last month’s survey, Boris Johnson hadn’t been confirmed as UK prime minister but that expectation was enough to knock sentiment,” she said.

“When this month’s survey was conducted, he was in situ and upping the ante with his ‘Do or Die’ approach to Brexit. As the recent Central Bank and our own Bank of Ireland analyses show, if the UK leaves the EU without a deal at the end of October, the Irish economy could suffer badly,” she said.

“So households and firms are understandably worried and unsurprisingly consumer and business confidence took another hit in August,” she added.

1 Row over ownership of Fota Island resort comes before High Court
2 Tax and the Pandemic Unemployment Payment: Your questions answered
3 Charlie Chawke plans 290 apartments and hotel on Goat pub site
4 Job losses in tourism and retail in Dublin could be permanent, new report warns
5 Four things that could help Ireland escape from the Covid-19 recession
6 Revenue fears fraudsters tapped bank details of 3,000 taxpayers
7 Consumers hesitant about travel as Covid-19 restrictions ease
8 Virgin Media’s Gavan Reilly named most influential Irish journalist on Twitter
9 Sterling stalls after news of Brexit impasse
10 Joint accounts: if one of us dies, can the other access the money?
Real news has value SUBSCRIBE