The society, founded in 1731, has always had innovation as its central focus 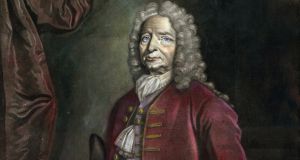 The society was founded by Thomas Prior, above, and 13 friends, all male and all from the middle classes of the Protestant ascendency

You can not be in business these days without someone exhorting you to be innovative, to apply new thinking to solve problems and make improvements that in turn will make more money. Those running an innovative company are described as entrepreneurs, business heroes with eyes firmly locked on the future and somehow able to anticipate where market demand will go next.

There is something inherently modern about this way of picturing the business world, probably because the term “innovation” has been commandeered by the tech industry. The word conjures up images of apps and advanced manufacturing, bioprinting and software engineering.

But society has always advanced by innovating, whether the modern society being described is from 2019 or 1719. New ideas always arise, and somehow money is provided to help that innovation be applied. This was happening long before we had an Enterprise Ireland or an IDA Ireland or a Science Foundation Ireland there to dispense the cash to conduct research and deliver innovation.

If you want a classic local example of this look no further than the Royal Dublin Society. It was founded in 1731 and has always been all about innovation, which remains a central focus to this day. The approach on research and innovation being taken by the Government and its agencies today would probably have looked familiar to the founders of the society.

The society was founded by Thomas Prior and 13 friends, all male and all from the middle classes of the Protestant ascendency. All were committed to developing Ireland through investment and education and condemned those absentee landlords who drained income away to Britain from their lands and businesses in Ireland.

A meeting held at Trinity College Dublin on June 25th, 1731, led to the formation of the Dublin Society for the Promotion of Agriculture, Manufactures, Arts and Sciences, renaming itself the Royal Dublin Society in 1820. The society agreed these foundation activities, and the aim was to apply the latest discoveries and research to the development of each.

Promoting agriculture, for example, involved having demonstrations and meetings to inform farmers about how to improve yields, or the development of a more efficient plough or harrow, or matching a crop with a particular soil type. The approach used by the society was learning by doing, and it promoted near to market research to deliver practical benefits. This was innovation and entrepreneurship in action.

The early emphasis favoured agricultural and equestrian activities largely because Ireland was all about farming and lacked an industrial or scientific base. But the society did maintain laboratories into the 1900s for the advancement of scientific research. The RDS looked for innovations that might be useful and also funded research through “premium” payments if an innovation looked like it might deliver an improvement.

Society records showed it gave out 18,000 what were in effect research and development grants over the years, most of them going to men. Women weren’t left out completely, however, and 160 premiums were granted to women working in textiles, silk worm growth, lace making, earthenware production and there was even an award for a woman in business who with her son was producing high-quality weapons such as swords.

In 1761 the society had £10,000 to dispense and took petitions from 20 factories, with each explaining why they needed the money. Among them was Mary Knadds, who ran a factory doing hand printing on linen for use in decorative clothing, curtains and other fabrics. She was unsuccessful but was quick to complain that it was unfair that her brother won a premium but she didn’t. She was successful in 1762, however, receiving £1,000 for the development of her factory. The RDS would have been happy to promote this, given linen manufacture was already widespread across the whole island of Ireland and this investment would also help further development of added value for Irish linen.

The society also supported the arts and opened a number of museums for the public to view. Its home base was in fact Leinster House, and it used the lawns at the front of the building to stage its spring and horse shows and other agricultural exhibitions. Important institutions began to grow up around the edges of the Leinster House campus. It founded the National College of Art and Design, the National Library, National Museum and the Natural History Museum, building them up with its own and members’ resources. All of these wonderful institutions were given to the State when it was formed, ready-made centres of innovation excellence.

Add to this the National Botanic Gardens of Ireland and given Ireland lacked a proper parliamentary chamber, the RDS eventually sold the building to the RDS for £68,000. It used the money to buy buildings and lands in Ballsbridge, which has remained the home of the RDS since.

There is much more that could be said about how the society used innovation and initiative to the benefit of Ireland – for example, in 1914 paying for and introducing the use of radiation as a treatment for cancer, known as the Dublin method, in the Royal Dublin Society Radium Institute.

With this kind of track record in innovation and entrepreneurship, it is no surprise that the RDS main hall will play host this November to the annual Irish Times Innovation Awards when the latest generation of entrepreneurs will show the world what they got. And thanks to Joanna Quinn and Natasha Surne of the society for all the help with its history and heritage.