That famous step for mankind took place amid riots, protests and scandals

Even as Apollo 11 landed on the surface of the moon the city of York, Pennsylvania, was convulsed by a race riot 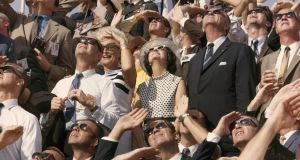 There has been a lot in the media over the past weeks as we close in like a moon lander on the 50th anniversary of the first touchdown by a human on the lunar surface.

There have been reports on how they did it, why they did it, and why it was a good idea and why it was a bad idea, but enough of all that. I won’t offer recollections on what I thought about it, or how incredible the science was, or how me and my siblings spent hours watching TV images from mission control in Houston, Texas, and witnessing this amazing dramatic event happening live before our eyes.

A big TV audience was a certainty given that the various manned launches in the Mercury, Gemini and Apollo missions had transformed space exploration into a television show. Nasa had done a good job keeping viewers engaged with expert commentators and simulations, and dramatic pictures of Earth as the various spacecraft drifted overhead.

But let’s park all of that, the Apollo 11 mission to the moon wasn’t the only show on the air. There were plenty of other things to keep us watching the 6pm news broadcasts.

Even as Apollo 11 plunked down on the surface of the moon the city of York, Pennsylvania, was convulsed by a race riot. The day after the famous step for mankind was declared a young Afro-American woman Lillie Belle Allen was shot as racial tension between white and black armed gangs in the city peaked.

Law and order broke down in the same way as had been seen in other cities right across the US, with looting and setting buildings alight. Things calmed down when the National Guard was called in, troops associated with each US state that can be deployed for just such occasions.

There had been similar rioting that month in Hartford, Connecticut, and larger race riots came both before and after that July. They demonstrated that we had a long way to go before civil rights could be achieved.

There was also the grim reportage coming in from the battlefields, usually accompanied by a high enemy body count and low numbers of US troops slightly injured and helicoptered out.

The protests reached a crescendo in the late 1960s when Richard Nixon entered office as the 37th president. Although hated by the protest movement, Nixon did follow through on his campaign promise to begin US troop withdrawals, with the first soldiers leaving on July 8th, less than two weeks before the moon landing.

People generally were against the war, and took it out on members of the military who were expected to travel home for visits wearing their uniforms, unfortunately making them easy targets for abuse. However, there didn’t seem to be any carryover at the time levelled at the space programme flight crew. Most were very experienced, steel-nerved air force and navy test pilots so were very much associated with the military. Yet I never heard a negative word about that when it came to missions into space.

Two days before the moon walk came another tragic event to watch on our televisions. It was to have a lasting effect on US politics and presidential ambitions, but we did not know the impact it would have just as that fateful small step for man was taken.

On July 18th, Edward Kennedy lost control and drove his car off a bridge at a place called Chappaquiddick. It led to the death of his sole passenger, Mary Jo Kopechne, and left behind a controversy surrounding the incident that persisted throughout Kennedy’s subsequent political career.

Seeing as this column is not about the moon landings I won’t talk about how remarkably complex and innovative the moon launches were. But innovation is what makes most complex systems operate well, and failure to innovate means a less certain future for any company ignoring this fact.

Just last week the Government made it easier for companies to keep reinventing themselves with a new national policy on SMEs and entrepreneurship. Interestingly it had OECD involved in its preparation, and the document launched last Friday will be incorporated into a wider review by the OECD. This final version is due out in October.

Maybe its authors can take some inspiration from the innovators behind that famous launch, which is not being discussed here but which serves as an example of what can be done if sufficient money is provided and you have the right people in place to use it well.