Macron insists any Brexit deal must guarantee stability in North 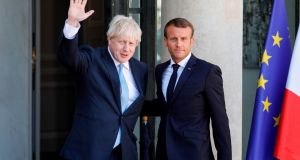 French president Emmanuel Macron and British prime minister Boris Johnson have agreed to work through September for an agreement between the EU and UK on a negotiated Brexit.

But, Mr Macron insisted, any accord on the UK’s departure from the union must guarantee the stability of Ireland and the integrity of the EU’s single market.

Following his meetings with Mr Macron and German chancellor Angela Merkel this week, Mr Johnson has secured a commitment from the EU’s most important leaders that they will listen to proposals to change the withdrawal agreement by inserting alternatives to the Northern Ireland backstop in the coming weeks.

However, both leaders, and the Government in Dublin, have made it clear that any proposals must achieve the same outcome as the backstop, and guarantee there will be no return to a hard border in Ireland. There is no expectation on the EU side that any new British proposals will achieve this.

Speaking to journalists earlier, the French president stressed the legacy of the conflict in Northern Ireland and the need to protect the peace there – the key point for the Irish Government since the Brexit process began.

Both leaders agreed Brexit must take place, out of respect for what Mr Macron called “the sovereign choice made by the British people to leave the European Union”.

Mr Johnson said the UK would “under no circumstances . . . be instituting or imposing checks or controls at the Border”. The British prime minister claimed there were “ways of protecting the integrity of the single market and allowing the UK to exit from the EU whole and entire and perfect as it were”.

Mr Macron said: “The key elements of the withdrawal agreement and the Irish backstop are not just technical constraints or legal quibbling. They are genuine, indispensable guarantees to preserve stability in Ireland and the integrity of the single market, which is the basis of the EU.”

In an earlier meeting with the Presidential Press Association, Mr Macron implied that Mr Johnson did not take seriously enough the risk of reigniting the conflict in Northern Ireland.

“There are still families whose children, brothers and sisters died in this conflict,” the French president said. “To think of reviving that, because it suits us, would be irresponsible. I consider that Irish peace is European peace. We must not allow it to be threatened by a political and institutional crisis in Britain.”

Mr Macron also said Irish reunification and integration of the entire island in the EU “would solve all the problems, but it is not up to France”.

In Dublin, a Government spokeswoman noted the “very strong solidarity from our European colleagues on the need for the backstop”.

“It has been welcome to see the British prime minister reaffirm his desire to leave the EU with a deal, while also acknowledging that the onus is on the UK to come up with viable alternatives to the backstop,” the Government said in a statement.

“It’s worth noting that the withdrawal agreement already allows for alternatives to the backstop, if they exist.”

In Copenhagen, where he was meeting his Danish counterpart and addressing a meeting of diplomats, Minister for Foreign Affairs Simon Coveney said that the EU was not willing to unwind the withdrawal agreement, but would listen to whatever proposals the British government came forward with.

Irish Government sources said they were happy with the strong stance taken by both Mr Macron and Dr Merkel in their meetings with Mr Johnson. While both held open the possibility of alternatives to the backstop, they also stressed the need for any British proposals to achieve the same outcome.

Mr Macron received Mr Johnson in the courtyard of the Élysée Palace, before French and EU but not British flags. The atmosphere between the two men was light-hearted, despite dire threats of shortages in Britain and transport chaos in the event of a “hard Brexit” on October 31st.