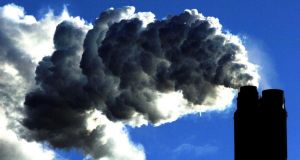 “We are damaging the web of life and the way that species interconnect and interact, but we don’t know to what end or how the damage we are causing will impact on ourselves.” Photograph: John Giles/PA Wire

Last week’s United Nations report on the health of the planet and the services it provides made for very uncomfortable reading. It shows that humans are making a complete mess of things, destroying biodiversity and damaging ecosystems. The pressure we are placing on the planet through overexploitation of resources on land, sea and air is driving the Earth and its human cargo towards a catastrophic end, one that will trigger a global mass extinction which may make the planet uninhabitable.

The sad thing is we can see this crisis heading our way but don’t seem to be able to do anything to save ourselves. This isn’t just about climate change, although those who deny the human impact on climate may use similar arguments in an attempt to undermine the UN report.

It may be portrayed as exaggeration or bad science, or an issue of dispute among the international team of scientists who compiled the report. Fake news. There is no dispute about the facts delivered, that at least a million species are now in serious decline or facing extinction. These species could disappear and if things continue as they are, another million more could follow.

This isn’t about protecting a rare frog on a golf course or blocking construction that would disturb a bat’s nest. This is about loss of key pollinators such as bees, wasps and hoverflies, among other insects that pollinate billions of euro worth of crops a year. These insects are already in serious decline if you want to talk numbers. Services provided by the Earth such as pollination, the delivery of fresh water, the abundance of food available in our oceans are all feeling the impact of human activity and excessive consumption, something that is forcing us towards what many scientists now say is the sixth global mass extinction of species.

Mass extinctions occur when there is a sudden and colossal planet-wide loss of species. They are usually driven by major environmental change, with existing species unable to evolve quickly enough to survive the change. The Earth has seen five of these events and the losses we are talking about are truly staggering.

The worst in terms of species loss occurred 251 million years ago when 96 per cent of all the species alive at the time were wiped out in what is known as the “great dying”. It was likely caused by a collection of natural events including massive volcanic eruptions in Siberia that turned the oceans too acid for most life and carbon dioxide release that switched on the greenhouse effect to raise temperatures and speed up release of another greenhouse gas, methane. The event nearly ended life on the planet.

Another occurred 444 million years ago when geological change – the uplift of the Appalachian mountains – triggered a severe ice age that killed off 86 per cent of species. Most people are aware of the mass extinction that ended the reign of the dinosaurs 66 million years ago. An asteroid struck the Earth in what is now Mexico, causing an abrupt change in the planetary environment that destroyed 76 per cent of all species including the mighty dinosaurs. Happily for humans there were survivors, including small mammals that provided the genetic feedstock that evolution turned into humankind. And the few dinosaur stragglers that survived, small bird-like creatures, evolved into the avian species we know today.

Some life always survives these events and those species that manage to persist go on to generate the next iteration of life. It will be the same for us if indeed we have entered a sixth mass extinction that will destroy the accumulation of life familiar to us today. Will we be among the surviving species or will environmental or other factors combine to end our time on the Earth?

We are shortening our odds considerably if you look at the UN report. We are damaging the web of life and the way that species interconnect and interact, but we don’t know to what end or how the damage we are causing will impact on ourselves. Are we confident that humans would survive a runaway greenhouse effect for example? Would we be able to use technology to help us survive? But what of the social unrest and migration that would follow a failure of crops in dry, overheated climates?

One direction we cannot turn to for help is planet Earth itself. It too evolves over geological time as the plates that make up its surface ride across the planet. It makes mountains and creates inland seas. It kicks off environment-changing volcanoes and lets geology alter its surface. It doesn’t care if a species pollutes its oceans with plastic or tears down oxygen-releasing forests. It is life, in whatever form, that instead must adjust to accommodate changes in the planet that arise through natural causes or careless intervention.