Amazon suitors in US should learn from Ireland’s seduction moves

We have turned corporate and political courtship into an art form 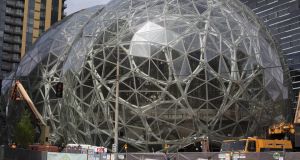 As Amazon currently scouts the United States in search of a location for its new HQ2 city mayors from several major cities have been using their best chat-up lines to woo the retail giant. Photograph: David Ryder/Getty Images

I always found it hard to watch British comedy series The Office. Its intense reliance on cringe comedic value made me feel the same way others do about films such as Saw. It just feels wrong to watch.

Observing political and state representatives trying to woo multinationals in search of new locations leaves me with the same disconcerted feeling I get when watching Ricky Gervais’s character, David Brent, humiliate himself.

In one particular scene where he conducts what BBC Worldwide’s YouTube channel has dubbed the “most awkward interview ever”, Brent’s poorly-veiled romantic advances towards the female character applying for a secretarial position are met with obvious discomfort as she not only politely refuses his invitation to go on a date but also his offer to fill the vacant position at Wernham Hogg Paper Company.

And that, sadly, is where my analogy falls short.

Multinationals relocating will of course have standards when it comes to choosing a new suitor, but they are seldom perturbed by one that feels the need to lay it on nice and thick.

So as Amazon scouts the United States in search of a location for its new HQ2 – a $5 billion facility which will employ up to 50,000 and add billions of dollars in investment over the next decade – mayors from several major cities have been using their best chat-up lines, the ones they had been keeping in reserve when more than just a casual economic hook-up was on the cards. With a dowry as considerable as the world’s leading online marketplace has to offer, Amazon is definitely a keeper.

Amazon has cited various criteria for any city to stand a chance, such as a friendly business environment; affordable real-estate prices, tax rates and energy costs; good quality of life; access to public transport; and a high standard of Stem education (not just at university level but also in local high schools so that a reliable pool of local talent is available for years to come).

Despite having a relatively poor track record for science and maths education in its high schools – not to mention a population that understands “public transport” only as meaning carrying as many people as can fit into the back of a pick-up truck, so abysmal are the bus and metro rail options – Austin is tipped to be a front-runner.

Good news for some but, in a town already feeling the effects of major population growth, the Texan capital has more than its fair share of locals with reservations as they continue their futile efforts to “Keep Austin Weird”.

It isn’t always conservatives who want to maintain the status quo. There’s many a nimby in the liberal camp too.

It appears to be still a wide-open race, though, and Bezos recently requested that city officials in any metropolis being considered remain tight-lipped until a final decision is made.

We’ve been “doin’ it and doin’ it and doin’ it well” for nearly three decades – from the impressive retention of big pharma for all these years to more risqué advances such as the red-carpet treatment given to now US President Donald Trump by then minister for finance Michael Noonan in 2014.

This footage may be cringeworthy to look back on, but it probably hasn’t hurt in keeping us out of the firing line of the current US administration.

American government – from local to federal – may have written the rule book on sucking up to corporate interests, but in Ireland we’ve turned it into an art form.

Just look at Taoiseach Leo Varadkar’s speech to the European Parliament last month where he somehow reminded Britain not to overlook the romance that has been blossoming between the two nations since the Belfast Agreement, while simultaneously reassuring the European Union that it will always have Ireland’s heart.

In a last-ditch effort to succeed in achieving a “Norway plus” type of trade agreement, Ireland should consider changing its national anthem to a more popular song with lyrics the British can not only understand but might even mistakenly believe were written about them.

Perhaps a Carly Simon number. No, not You’re So Vain. A far more seductive tune is needed, such as Nobody dDoes it Bbetter.