Once again the gig economy is defying conventions

John Holden: There is a growing cohort of older workers joining the new economic space 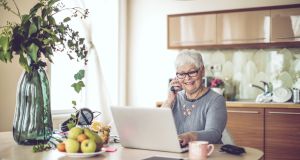 Much of the change currently happening in the modern workplace is being driven less by millennials than it is by their parents, or even their grandparents

A recent report published by the McKinsey Global Institute assessing the impact of automation on future employment trends made for startling bedtime reading.

According to the report, approximately half of all work activities currently carried out by human beings globally have the “technical potential to be automated by adapting currently demonstrated technologies”.

These are the kinds of statistics that have lead to the unwarranted fear-mongering which surrounds AI (like new technologies have never altered the workplace status quo before). “Even as it causes declines in some occupations, automation will change many more – 60 per cent of occupations have at least 30 per cent of constituent work activities that could be automated. It will also create new occupations that do not exist today, much as technologies of the past have done,” says the report.

In addition, automation technologies, including AI and robotics, will significantly improve productivity for businesses and, in turn, create significant economic growth. “The extent to which these technologies displace workers will depend on the pace of their development and adoption, economic growth, and growth in demand for work.”

Either way, change is gonna come, that, say the folks at McKinsey, “could match or even exceed the scale of historical shifts out of agriculture and manufacturing”.

One trend that’s already changing is the growing necessity of workers – particularly those in their 40s, 50s and beyond – to switch occupational categories.

All workers in the future will need to adapt as their occupations “evolve alongside increasingly capable machines”. This inevitable shift to increased automation comes in tandem with aging populations across the Western world. Many of us are now resigned to the fact that we’ll likely be working well into our 60s and beyond. By 2024, one quarter of the US workforce will be at least 55, double what it was in 1994.

To confound matters further, in the US almost two-thirds of workers aged 55 or over say they have experienced age-based discrimination at some point. That’s according to research from Konversai, a platform for gig economy and freelance workers, which helps connect them beyond their shared participation in new economies through social media.

According to the platform’s CEO and founder Sushma Sharma, in 2015 ageism complaints accounted for a quarter of all workplace discrimination complaints.

This is having an impact on the decisions older workers, who either by choice or necessity, make when re-entering the labour market. The prospect of joining the traditional corporate structure, where they are likely to have skillsets now automated by machines, while also being valued less than their younger colleagues and, therefore, overlooked for promotions, wouldn’t fill anyone with much excitement.

There are alternatives though, principally in the gig economy, where you’ll find a growing number of middle-aged workers right alongside the millennials considered to have pioneered this economic counter-revolution in response to the failures of the traditional economy in the first place.

Don’t be fooled by the the fresh-faced “women laughing while eating salad” types, which gig economy marketing departments want us to believe make up the bulk of workers in the sector. It’s chock full of older folks (who may also enjoy a good laugh while eating lettuce). According to the US bureau of labour statistics, anyone over 65 still working is four times more likely to be self-employed than those under 34. Internal Uber figures suggests at least half its drivers are over 40.

And alternative work arrangements – often freelance or part-time which lack benefits like health insurance – have been growing rapidly for the last decade at least, long before everyone decided Uber and Airbnb were the instigators of a campaign to erode workers’ rights.

Freelance payment platform Hyperwallet conducted research which found 12 per cent of 2,000 female gig workers surveyed were aged between 51 and 70 years old. At first glance this might not appear to be the most mind-blowing statistic, but given that middle-aged women have, historically, been grossly underrepresented in the labour force, it’s a pretty positive trend.

Economists, marketers and the media, myself included, put an unhelpful emphasis on the influence of millennials when it comes to understanding the changing attitudes to work and life we continue to experience as society edges ever closer to the roaring 2020s (which I predict will be as “roaring”, if not more so, than the 1920s, but with more robots doing the “fox trot”).

While it may stand to reason to attribute major changes, shifts and the growth of new movements in society to the youngest, most vocal sections, it is also shortsighted, lazy and frequently inaccurate.

Much of the change currently happening in the modern workplace is being driven less by millennials than it is by their parents, or even their grandparents.