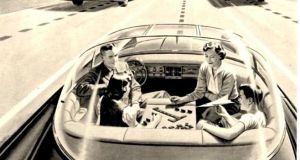 A recent survey suggested commercial demand for driverless cars may not be as strong as we assume. Photograph: iStock

For close on a decade now, robot cars have been dominating the automotive headlines. Ever since Google, especially, began to seriously work on and test self-driving car technology, there has been an assumption that robotic cars are just around the corner, and that driving will soon be a thing of the past.

Is that really the case, though? It’s very easy to get caught up in the headlines, or assume that because modern-day Volvos, Mercedes, BMWs, and others can steer themselves on motorways and brake if the car in front of them slows down, that your car is, any day now, going to morph into C-3PO or R2-D2 on wheels.

That may not be the case though, and there are now some small signs that major carmakers and technology leaders are, if not quite backing away from an autonomous future, then at least casting some doubt in its direction.

A survey showed that 66 per cent of drivers would prefer to be able to take control of their cars, even if autonomous vehicles become widespread

One of the most significant of the new doubters is engineer Akira Yoshino, who was one of the pioneers of lithium-ion battery design, the batteries without which your modern phone, laptop, or electric car simply would not exist. Speaking to Bloomberg, Yoshino said that autonomous cars will need a major rethink, possibly a major new breakthrough, in battery design and technology.

“Durability will become very important. Cars are a completely new application, and we’ll have to wait until we find out what kind of batteries will really be needed. The future of batteries depends on what will happen to the future of the automobile society.”

Presumably, these are technical matters that can be, if sufficient commercial demand is there, overcome. But what if the commercial demand is not there in the first place? Carmakers, driven by the growing influence of tech companies working in the automotive sphere, have headlong-lunged towards autonomous technology, confident that a multibillion-euro market is there for the taking. Is it, though?

According to Mazda, perhaps not. Research carried out across Europe by Mazda and Ipsos shows that drivers are still, in spite of it all, in love with driving. The survey, which took the opinions of some 11,000 drivers into consideration, showed that 66 per cent would prefer to be able to take control of their cars, even if autonomous vehicles become widespread.

Only 33 per cent agreed with a response of “welcoming the arrival of autonomous cars” and that was an average – the number was lower in markets such as the UK, France, and the Netherlands. Significantly, there’s no major difference according to age – 18-24-year-olds were actually less likely (33 per cent) to welcome autonomous cars than those aged 25-34 years (36 per cent) or 35-44 years (34 per cent).

The survey also revealed, in as much as such a survey can, a continuing strong emotional connection with our cars. An average of 69 per cent of drivers “hope that future generations will continue to have the option to drive cars” – the figure is as high as 74 per cent in Poland and 70 per cent or higher in the UK, Germany, France and Sweden. In addition, 36 per cent of those who enjoy driving see their car and the act of driving as an “extension of my personality” with the number rising to 56 per cent in Poland and 46 per cent in Italy. And 34 per cent agree driving is in danger of becoming a “forgotten pleasure” – in France, Italy and Poland the figure is 40 per cent or higher.

Mazda Motor Europe’s president and chief executive Jeff Guyton said that “as a brand we simply love driving and this research demonstrates very clearly that a huge number of European drivers agree with us – of course, there is a role for self-driving cars but for us, and for many others it seems, there really is nothing quite like the physical pleasure of driving. This is why at Mazda we believe in putting the driver at the heart of everything we do and it’s why our current Drive Together campaign focuses on the bond between car and driver. We call this Jinba Ittai which is the Japanese phrase used to describe the perfect harmony between the mounted archer and his horse. It is this human-centric philosophy that underpins our business and helps us create cars that bring the driver and their car closer together.

“If you look at the car industry in general, we believe that many manufacturers are taking a lot of the pure driving pleasure away from drivers. At Mazda we are fighting against this and it’s clear from the research that there is still a huge percentage of drivers who just want to be behind the wheel. In a world that questions the act of driving and devalues the role of the car and the role of the driver through technological changes, we will continue to challenge convention for the love of driving.”

Another major hurdle standing between here and any autonomous future is the sheer complexity and expense of the technology needed to make robotic cars as safe or safer than well-driven human-controlled cars. Google will point to the millions of miles it has racked up between incidents with its self-driving cars, but these cars are searingly expensive prototypes, shepherded by experienced engineers and designers. When you try to put robot cars into the real world, with average drivers and users in control, it’s a different story.

This was found by Volvo. The Swedish carmaker is arguably further ahead with autonomous car development than many, thanks in part to a collaboration with Uber, but its plans to have Swedish families test its autonomous cars on public roads has hit a snag; the cars are not ready. When the Drive Me programme was announced two years ago, Volvo suggested that the families selected for the real-world test would be able to experience at least some full-autonomous driving. Volvo’s director of government affairs Karl-Johan Runnberg claimed at the time that “to start with we foresee autonomous drive will be available in controlled areas, for example on roads with no unprotected road users and no oncoming traffic. Motorways are a good type of road to start with the implementation of autonomous drive.”

This month, though, Volvo took a step back from that, and announced that while the Drive Me programme is going ahead, it will be with “Level Two” autonomous cars – essentially the existing Pilot Assist system available on all XC60s, XC90s, S90s, and V90s. The “Level Four” fully-autonomous driving originally expected to form the bulk of the test has so far proved unready, and Volvo is not going to take the risk of putting it on the road.

“On the journey, some of the questions that we thought were really difficult to answer have been answered much faster than we expected. And in some areas, we are finding that there were more issues to dig into and solve than we expected,” Marcus Rothoff, Volvo’s autonomous driving programme director, told Automotive News Europe.

“The development in sensor performance and processor capabilities is going so much faster than we expected in 2013. Because advancements are being made at such a rapid pace, we want to make this decision as late as possible.”

Instead, the Drive Me programme will ramp up gently over the next four years, with the families starting out using current hands-on, eyes-on technology, and being gradually trained and instructed by Volvo’s experts in how to use higher-levels of autonomy safely. The Swedish carmaker reckons that it can still glean some useful data from the test, even at a slower rate.

“Drive Me is an important research project for Volvo Cars,” said Henrik Green, senior vice-president for the company’s research and development department.

“We expect to learn a lot from engaging these families and will use their experiences to shape the development of our autonomous driving technology, so that by 2021 we can offer our customers a fully autonomous car.”

Perhaps it is short-sighted, or simply Luddite of us to declaim the autonomous future. Certainly, you should be in no doubt that this article has been written by a correspondent with petrol in his veins and a love of driving firmly stamped on to his cerebral cortex. Clearly, not everyone’s a car nut, and many millions, even billions, of commuters and motorists would welcome the death of the steering wheel and pedals, and the arrival of the big red go/stop button.

Thankfully for those of us who do still love driving, however, there remains a beating heart of enthusiasm in at least one major carmaker – Porsche. The German company has said that it wants to be the last carmaker to include a steering wheel as standard equipment. The comment was made by Porsche’s head of finance and IT, Lutz Meschke. “Driving yourself will hopefully remain the most important thing at Porsche for a very long time. The Porsche sports car will be one of the last automobiles with a steering wheel,” he said.

“A Porsche will always be a car that you will want and be able to drive yourself. Nevertheless, there are of course aspects of autonomous driving that are interesting for us: Traffic jam assistants or automated parking, for example. It’s attractive to be able to use the drive into the office during rush hour for my first virtual meeting. Or imagine you have dinner plans and are running late – and you can let the car park itself automatically. That’s really useful. In traffic jams and when it comes to parking, the functions of automated driving will soon be must-haves.”

Porsche plans to plug into the enormous database of its motorsport heritage, creating a heady mix of tomorrow’s tech with yesterday’s laptimes. You know those “Ghost Car” training functions on racing video games, that show you the ideal line and braking points on a racing track? Imagine that, but for real.

“Another idea is the Mark-Webber-function, as we call it – named after the race driver and our brand ambassador. With this function, the vehicle could drive autonomously on a racetrack like the Nürburgring – just like Webber would drive,” explained Meschke.

Robot cars will, almost doubtless, become eventually commonplace, but the journey from today to that point may well be longer and more torturous than we currently assume.