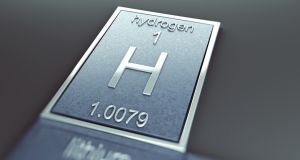 Have you ever wondered what happens if it gets just too windy and the time comes to switch off surplus wind power? At the moment the excess is just ploughed into the earth and lost as heat, but an international consortium known as Gencomm seeks to reverse this loss by turning it into hydrogen.

Dr Rory Monaghan is a lecturer in the energy systems engineering lab in mechanical engineering at Galway. He is also an investigator in MaREI, the Galway-based Centre for Marine and Renewable Energy. He will lead the Irish wing of the €9.39 million project and he has a team of six taking part in the research.

Academics in Belfast Metropolitan College are the overall lead and there are also private-sector companies taking part and providing finance. Overall funding for Gencomm comes via the European Union’s Interreg programme.

It is actually three projects in one given there are three research initiatives that seek to include hydrogen as part of a greener energy cycle. The problem with the periodic oversupply of wind power is known as “curtailment” and effectively it involves throwing away otherwise useful power, says Monaghan.

“The power is completely lost, turned into heat. We lose about 3 per cent of our wind energy to curtailment. It could get as bad as 14 to 17 per cent if we don’t upgrade the grid and use some kind of energy storage,” he says.

This is where the Gencomm project comes in, seeking to make better use of alternative energy sources by including a hydrogen dimension. There are projects now under way in Northern Ireland, Scotland and Germany, each making use of hydrogen in a different way, says Monaghan.

In Germany they are using solar energy to split water into hydrogen and oxygen and then bottling the hydrogen for use as a transport fuel. In Scotland the site is a fish farm where they use wind energy to split water but here they use both gases. The hydrogen provides an energy upgrade to improve methane coming from the biogas system that powers the farm, while the oxygen is used to improve the water quality where the fish are based. In the North it is wind power used to split water and capture the hydrogen gas for use in transport, heating and in fuel cells to generate electricity.

The Galway team will produce computer-based systems to help green energy producers to make best possible use of their energy resources. Monaghan’s group is taking two approaches that involve using data coming from the three sites. The first is a system that can model a provider’s energy system and client base and provide immediate price comparisons and guidance on where improvements through investment would deliver the greatest returns.

The second is a “real-time” approach that provides live information to make predictions about the best time say to switch on the turbines for power or shut them down to start the hydrogen production cycle.

By the project’s end in March 2020 there will be three fully working sites using hydrogen as part of their energy mix and the Galway decision-making tool to help producers and buyers make choices.