Start-up entrepreneurs from abroad made welcome in Ireland 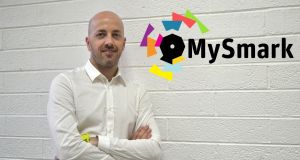 Nicola Farronato, who moved from Italy to Ireland to research and set up his digital marketing project B-sm@rk.

There is no doubt that IDA Ireland is doing a sterling job in attracting foreign businesses to the State and has firmly put the country on the map as an excellent place to build a business relationship, but what about those who made the first move and chose Ireland to berth their ideas and set their foundations? I spoke to some of Ireland’s newest entrepreneurs to see why they took a chance on Ireland to be a good match.

Dennis David moved to Ireland from Virginia in the United States to start up IT support companies NetDefender and Agenda.

“I’m actually the creator of the technology that Agendasec [of which Agenda is an affiliate company] owns, I’d been working on that for about 14 years,” says David. “I was about ready to realise it when Edward Snowden released a whole bunch of information in the United States that made everybody panic. So it was not a place to be, in an encryption company, in that time.

“I started researching intellectual property and data-protection laws worldwide – this is even before the GDPR [the European Union General Data Protection Regulation], which we are heavily involved in.”

He narrowed his search for a base country to Ireland and Germany, given the robust data-protection laws already in place in both countries.

“I was looking at those two countries and came here and fell in love with the people and the country and the culture. And I like Guinness better than drinking my beer warm in Germany.”

The Guinness Enterprise Centre (GEC) in Dublin is home to David’s businesses, the location selected for the connections it could bring. “GEC is fantastic and I can’t say enough about [GEC manager] Eamonn [Sayers] and his team but the other folks really haven’t done a heck of a lot. I mean, I don’t want to trash anybody – the challenge was our original concept fell between IDA and Enterprise Ireland. EI is for companies here that want to go out and IDA is for foreign companies wanting to coming in and I was an Irish company.I was started in Ireland and I wanted to sell it in Ireland and use it at as a jumping point to go to the rest of the world.

“We did, by hook and by crook and a lot of networking – with Eamonn’s connections – get a pretty good network going and we are going really well now, we are getting more and more customers and literally we are signing people up now on almost a daily basis at this point.

“I’m very happy overall from a business standpoint. This has been a huge success, it has been fantastic and I’ve made more business acquaintances.

“What I find a lot better here than in the States is there you can be really good at what you do but you’re in line with about 100,000 other people that do the same thing. In Ireland I am a really big fish in a really little pond, which makes you feel pretty good. I would recommend it to other people wanting to do business here. I would just say make sure that you dot your i’s and cross your t’s.”

Nicola Farronato moved from Italy to Ireland to research and set up his digital marketing project B-sm@rk, which is also located in the GEC.

“The first time I came to Ireland was 2010 for a couple of days’ exploration and initial connections with a couple of people here. Basically I moved to Ireland a few years ago only for the purpose of starting up this business, which has changed my life.

Ireland had given the best feedback with regard to his business idea back in 2011, he says. “We were presenting our business idea in Italy and we didn’t get so much attention. We came to Ireland and we were shortlisted for an NDRC [National Digital Research Centre] launch programme. We ended up winning that programme and attracting some investments. We’ve built a unique mix of business and social connections here that has helped a lot on our journey.

“For the first couple of years we did pretty much R&D. We came here with a PowerPoint presentation and we have started building our prototype. In the last 2½ years I have taken the travel and tourism route and we are getting to the right side of the market and attracting more interest and opportunity for investment.”

Olivier Masclef moved from France to set up Black Shamrock Studio, which is hosted in Dublin’s Space@DublinBIC on Dawson Street. Having already owned a video-gaming company in France he knew exactly what he was looking for.

“I had the same kind of company for 10 years in France and I wanted to start a new business but not in France – it is too complicated [there], too much red tape. I’d benchmarked different destinations in Europe – because my main client would be in Paris it had to be euro-zone. With my budget and wanting to deal in euro and a pro-entrepreneur country, Ireland is also English-speaking.

I came to Ireland and I saw that there’s some very good college education here – quite a few which have video-game training courses, meaning a lot of junior graduates to hire. There’s not a lot of big video-game studios here , most of them are small, indie, two- to four-people studios. So there’s a lot of well-educated people to hire, not a lot of big studios to compete on this and, well, I like Ireland, the French get along very well with the Celts.

“It’s a good destination, it is very well connected to whichever city you want to go to in Europe but also North America, where there are lots of video-game conventions and businesses.

“Someone told me when I arrived here to go and check out ConnectIreland, which is a State body for attracting new business here. They’ve been very helpful in finding me contacts and setting up meetings with whoever I want to meet, like accountants or lawyers. It is a very good service.”

Ireland certainly seems to tick a lot of boxes when it comes to finding a match for foreign entrepreneurs. It would appear that Ireland is definitely worth a swipe to the right.