The Rathmines house, the multimillion AIB debts and the link to a Galway family

Senior banker who lost fortune in crash gave €2.4m house to wife, who sold it to student whose family owed AIB €20m 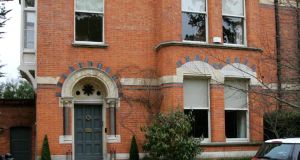 Ardeen, 11 Palmerston Park, Rathmines: acquired from the wife of former AIB banker Thomas Hopkins in 2014 by the then 25-year-old son of William and Sheila Moran, who ran Morans on the Weir, Kilcolgan, Co Galway

A substantial red-brick house in Rathmines, Dublin 6, which a senior AIB banker who lost tens of millions of euro in the property crash transferred to his wife in 2010, was subsequently bought by a Galway student whose family owe millions to the same bank.

The house was acquired from the wife of former AIB banker Thomas Hopkins in 2014 by the then 25-year-old son of William and Sheila Moran, who ran Morans on the Weir, Kilcolgan, Co Galway, and who had debts with AIB of more than €20 million, public records show.

Two months before the house was sold for €2.35 million, a judgement for €37.2 million was registered against Mr Hopkins in favour of the National Asset Management Agency (Nama), the State-owned body to which property loans were transferred from Irish bailed-out banks.

Also during 2014, William and Sheila Moran were involved in a row with AIB over their apparent failure to follow through on commitments to sell assets in order to pay down their debts. One aspect of the controversy involved shares in a Polish property company being transferred by William and Sheila Moran to their son Donal, who is now the owner of the house in Rathmines.

Efforts to establish who is living in the house, a very substantial semi-detached period house on Palmerston Park, were unsuccessful. A woman who answered the intercom told The Irish Times there was nobody home. A letter sent to the address three weeks ago met with no reply.

Property registry records show Donal Moran is the owner of an Irish property company, Coolcor Investments, which acquired the valuable Rathmines house from Mairéad Hopkins, on November 7th, 2014. Mr Moran is described as a student in the Coolcor company filings and his address is given as The Weir, Kilcolgan, Co Galway.

The house was transferred by Mr Hopkins to his wife in 2010, the same year he resigned from his position as general manager of business banking with AIB. A judgment in favour of Nama was registered against Mr Hopkins on September 4th, 2014, in relation to loans that had been given for property investment purposes.

In July 2014 Mr Hopkins consented to the summary judgment of €37.2 million, but liability for a further €17 million was to go to a full hearing in the High Court. He gave Palmerston Park, Rathmines, as his address in the case. Mairéad Hopkins was also a party in the case and was disputing liability to €11 million of the €17 million.

The summary judgment involved loans issued by Bank of Ireland and Anglo Irish Bank, and those loans were part of a portfolio of loans issued by those banks, and AIB, to the defendants (Mr and Ms Hopkins), and others.

In their defence the couple argued that the debts that were being disputed arose from loans borrowed by a family trust, and liability was limited to the trust’s funds. The court was told AIB had not sought personal guarantees from Mr Hopkins. Ms Hopkins alleged she was unaware, when setting up an investment trust for the couple’s three children, that the loans were secured on their Palmerston Park family home and that she could be held personally liable.

The court was told by Ms Hopkins’s counsel that her husband had misrepresented to her the nature of the loan facilities and had failed to explain they were secured on her home and that she might be held personally liable for them.

Court records show the case against the couple was “adjourned generally” in April 2015. A spokesman for Nama said he could not comment on how the case was resolved, for confidentiality reasons.

The property price register shows the Palmerston Park house was sold for €2.35 million in November 2014. The transfer was registered in the Registry of Deeds in September 2015. There is no mortgage registered by Coolcor on the Companies Register, where Coolcor describes itself as a property holding company. It was incorporated in July 2014.

Records in the Companies Office show that a company called Hopkins Financial Services Consultants, with a registered address at the house on Palmerston Park, was incorporated in July 2012 and placed into voluntary liquidation in October 2015. Its shareholders were Sarah, Julie and David Hopkins, all of Palmerston Park. Mr Hopkins was a director, with the same address. The company’s records show that its registered address changed on October 25th, 2015, to an office on Fitzwilliam Street Upper, Dublin 2.

In the case taken by AIB against William and Sheila Moran the transfer of the shares in the Polish property company to Donal Moran caused concern to the bank as it had believed the Polish company’s asset, a Polish office block, was to be sold as part of a deal with the bank whereby it would get part of the money it was owed. It was also concerned because it had believed that Morans on the Weir would also be sold by the couple as part of the debt deal.

Morans of the Weir is a famous pub and seafood restaurant that has been owned and run by the Moran family for generations.

However, the couple sold the business in April 2011 to a company, The Weir Trading Ltd, of which the shareholders were members of the Moran family. The bank was surprised when it learned of the transaction, as it had not received any of the proceeds.

William and Sheila Moran were the subject of judgment mortgages issued in 2013 and 2016 to, respectively AIB and the National Asset Management Agency (Nama), both of which are State-owned.

While working in a senior position in commercial banking in AIB Bankcentre in Ballsbridge, Dublin, Mr Hopkins was also, prior to the economic collapse, involved in significant property ventures.

He was a 50 per cent shareholder in a company called Marchbury Properties which had bank loans in excess of €7.24 million at the end of 2008, when it lost €7.24 million. A receiver was appointed to the company in 2016. Ms Hopkins was a former director of the company.

When the property crash occurred, AIB initiated an internal inquiry into Mr Hopkins’s involvement in property business ventures outside the bank, including his investments with another senior AIB executive, Galway-based John Hughes, who was also heavily involved in property while working at the bank. The outcome of the inquiry is not known.

Last year Mr Hughes was the subject of a summary judgment order for €8 million in favour of Nama and made against him and former top Anglo Irish Bank executive, Thomas Browne of Brighton Road, Foxrock, Dublin.

One of the partners of Mr Hopkins and Mr Hughes in some of their property ventures was businessman Donall Dooley, of Oranmore, Co Galway. Mr Dooley was also involved in property ventures with William and Sheila Moran, and is named along with the couple on the judgment mortgage obtained in 2016 by Nama.

AIB initiated a legal action against Thomas and Mairéad Hopkins in 2010 but it was struck out the following year. It is not known what the bank’s claims were against the couple.

Requests to speak to Donal Moran met with no response and efforts to contact Mr and Ms Hopkins were not successful. Sheila Moran told The Irish Times that she knew nothing about her son being linked to the purchase of the property on Palmerston Park. She said she would pass on to her son a request from The Irish Times that he would get in contact. Donal Moran had not made contact by the time of going to press.