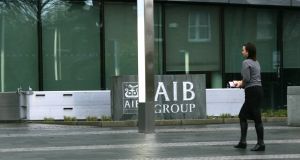 AIB has so far returned €10.2 billion to the State since it was rescued.

AIB’s chief financial officer Mark Bourke signalled on Thursday that as few as 80 top executives and managers stand to benefit from the lender’s plan to establish a deferred annual share scheme, starting in 2019.

The scheme, outlined in the bank’s annual report published earlier this month, would offer deferred shares in the bank each year up to the equivalent of 100 per cent of their salary. The bank has said it could be five or six years before the share awards could be exercised.

“We would have evaluated somewhere between 80 and 100 critical roles which would potentially be a beneficiary of a scheme like this,” Mr Bourke told Oireachtas finance committee members at a meeting on Thursday.

AIB is the first bailed-out Irish bank to outline plans for a return to management incentives since the onset of the financial crisis.

Mr Bourke said “variable pay” for the bank’s remaining 10,000-strong workforce would be something it would look to look at “as we normalise”.

Currently, any bonus plans involving a bailed-out Irish lender would be subject to an effective tax rate of about 90 per cent, as a result of a measure injected into the 2011 Finance Act.

AIB chairman Richard Pym confirmed in a letter to shareholders, issued on Thursday ahead of the bank’s annual general meeting on April 23rd, that the plan would be put to a non-binding advisory vote at the gathering. There is an expectation that the Government, which continues to own 71 per cent of the bank, will abstain from voting on the resolution at the meeting.

“The key objective of the plan is the creation of long-term sustainable value for customers and shareholders, while also facilitating the retention of key executives considered critical to the delivery of AIB Group’s strategic objectives and safeguarding AIB Group’s capital, liquidity and risk positions,” he said, adding that any such plan would need permission from the Minister for Finance.

“The State’s ability to recover the value of its investment in the AIB Group will act as a final condition prior to any vesting or payout of awards under the proposed plan.”

AIB required a €21 billion taxpayer bailout during the crisis. The bank has so far returned €10.2 billion to the State since it was rescued, including capital repayments, interest on bailout bonds, guarantee fees and dividends.

Meanwhile, Jim O’Keeffe, head of AIB’s financial solutions group, refused to comment on – or confirm the existence – of a €3.75 billion portfolio of non-performing loans that the lender currently has on the market. The portfolio, known as Project Redwood, includes property investment loans and buy-to-let mortgages, according to market sources.

Mr Bourke said the the size of any potential sale “changes massively” as it is marketed to outside investors, as many borrowers in default seek to re-engage with the bank on finding a restructuring solution.

The bank has said it has no plans to sell private home loans as it seeks to lower its 16 per cent non-performing loans ratio, amounting to €10.2 billion of loans, down to European Union norms of about 5 per cent. Still, some €3 billion of this reduction will happen naturally as restructuring solutions for distressed borrowers pass through a probationary period to become performing loans again.

1 Will your boss let you work long-term from home – or from abroad?
2 Plans for €2bn Dart expansion lure Bombardier to Dublin
3 Google tells workers to return to country where they are employed
4 City firms move £1.2tn and 7,500 jobs out of London - EY
5 AA Ireland bought by Olivier Sarkozy-led fund for more than €240m
6 McGuinness faces Brexit and Covid grilling at parliamentary hearing
7 Wexford Solar bought by energy giant EDF in deal to build eight solar farms
8 Subway bread too sweet for the Irish tax authorities
9 Ryanair signals possible closure of Cork and Shannon airport bases
10 Only half the homes needed this year will be built, construction event told
Real news has value SUBSCRIBE