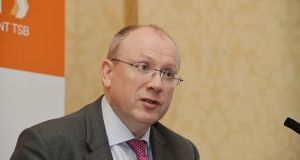 PTSB chief executive Jeremy Masding: “It is simply not possible to meet the regulator’s target and time scale within the capital envelope without a loan sale.” Photograph: Alan Betson

Permanent TSB (PTSB) will tell the Oireachtas finance committee on Thursday that it will be impossible to reach European Central Bank targets to reduce its level of bad loans without resorting to loan sales.

The 75 per cent State-owned lender has endured political criticism since it unveiled plans in February to sell €3.7 billion of distressed buy-to-let and owner-occupier mortgages as it seeks to cut its 26 per cent non-performing loans (NPLs) ratio, the highest among Irish banks, to the 5 per cent European Union average.

“Of course, the regulator did not dictate specifically how individual banks should reduce NPLs. We have never claimed that,” PTSB chief executive Jeremy Masding will say in his opening statement to the committee, a copy of which has been seen by The Irish Times.

“As we stand today, the regulatory guidance makes a loan sale an inevitable choice by the bank – even if it’s not a specific direction by the regulator. It is simply not possible to meet the regulator’s target and time scale within the capital envelope without a loan sale.”

The ECB has set out the NPLs ratio target, the “various tools” which can be used to lower the number, and the time scale under which it must be done, Mr Masding’s statement noted.

News of the planned PTSB loan sale – known as Project Glas – prompted Fianna Fáil to introduce proposed laws that would see buyers of such loans, most likely overseas private-equity or hedge funds, come under direct regulation of the Central Bank. Currently, only the firms servicing the loans are subject to regulation.

PTSB executives said last week that they were seeking regulatory approval to reclassify €900 million of restructured loans in Project Glas as performing loans. This would allow the lender to pull the debt from the portfolio sale.

This part of the portfolio is made up of 4,300 borrowers who have had their mortgages split, where repayments on part of the loan are put off to a future date. Under current European banking rules, these remain categorised as NPLs.

Separately, AIB will confirm to the Oireachtas committee on Thursday that it does not plan to sell owner-occupier loans as it seeks to lower its 16 per cent NPLs ratio, amounting to €10.2 billion of loans, down to European Union norms. That would equate to reducing the stock of bad loans to €3 billion to €4 billion in AIB’s case, executives from the lender will tell the Oireachtas committee.

The bank is known to be in the process of selling a portfolio of non-performing commercial real-estate and buy-to-let loans, known as Project Redwood and which has a par value of about €3.75 billion.

The bank said that it expects more than €3 billion of restructured loans that are in a probationary period to fall out of the NPL classification in the coming years.