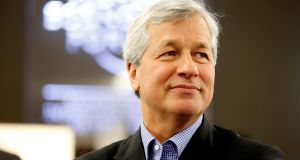 JPMorgan Chase chief executive Jamie Dimon $28.3 million remuneration for 2017 included perks such as personal use of corporate aircraft ($73,921) and personal use of cars ($29,848). Photograph: Jason Alden/Bloomberg

JPMorgan Chase chief executive Jamie Dimon earned as much in a day as the typical employee at his bank took home in the whole of last year, putting him near the top of an emerging league table of big-bank chief executive pay.

In an annual proxy filing, the biggest US bank by assets said that its chairman and chief executive was paid $28.3 million (€23 million) last year, or 364 times the median employee, who received $77,799, including firm-paid benefits.

Charlie Scharf of Bank of New York Mellon, a protégé of Mr Dimon who arrived at BNY in the summer of last year, ranks third, with a $20 million package 354 times the average worker’s remuneration.

The median ratio for the listed US banks to have reported so far is 135 times, according to Autonomous. JPMorgan declined to comment.

The disclosures of pay multiples, mandated by the Dodd-Frank Act of 2010, finally came into effect for all listed US companies this year. Critics say such figures are a crude metric, telling investors very little about the composition of a company’s workforce or the particular ways in which it has identified the “median” worker. But advocates say the tool is necessary as a way to restrain pay for top executives, which has consistently outpaced gains for lower-ranked workers.

But the bulk of his pay came in stock awards ($21.5 million), bumped up after a year of record annual net income of $26.5 billion, excluding the effects of the tax reform, on record revenues of $104 billion.

JPMorgan made a switch to using so-called performance share units as part of variable pay for top managers in 2016, in response to a challenge by investor groups to its previous pay policy at its annual meeting a year earlier. – Copyright The Financial Times Limited 2018