No one on credit committee had expertise on London property market, inquiry told 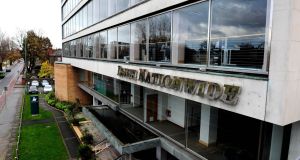 More than 40 per cent of the group’s loans were extended to the UK market at the height of the property boom, primarily in the London area.

John Roche, a member of INBS’s credit committee between 2001 and early 2007, when he left the lender, told the inquiry in evidence delivered via a video link from France, that Tom McMenamin, a former commercial lending manager, typically informed the credit committee of loan applications being advanced by Gary McCollum, who once led the society’s UK lending from a Belfast base.

“We didn’t have a big discussion about the Belfast loans,” said Mr Roche “Nobody [on the credit committee] had the expertise to speak about the London property market.”

Mr McMenamin usually “called out” the loans that Mr McCollum was recommending to go forward to the board for approval, he said.

The inquiry, set up in 2015 but where substantive hearings began only in December, is looking into seven so-called suspected prescribed contraventions at INBS, with the first phase of open hearings focused on the role of the credit committee between August 2004 and September 2008.

While Mr Roche confirmed that the credit committee assessed commercial loan applications, he did not recall the committee reviewing cases of large commercial loan arrears, INBS’s exposure to specific sectors or customers, or issues raised by internal audit, outside advisers or regulators. These were all to be covered under the credit committee’s terms of reference, issued in 2003 and updated in 2007.

While the terms of reference also specified that the minutes of meetings should reflect committee discussions, Mr Roche said that they just captured whether loans were approved or declined.

Meanwhile, the chairwoman of the inquiry, Marian Shanley, directed that Irish Bank Resolution Corporation, which took over INBS in 2011 and was put into liquidation in 2013, be written to in order to ascertain if it has a copy of a diary kept by Mr Fingleton’s former personal assistant while working for him.

Neither the legal team assisting the inquiry nor the Central Bank’s enforcement unit have been able to locate the diary. The inquiry continues.