Vulture funds are getting harder for customers to deal with, says watchdog chief 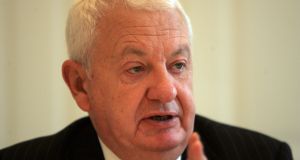 Small firms and farmers risk losing their businesses because they are struggling to pay off loans sold to vulture funds, the State’s Credit Review Office says.

The banks’ approach to small business and farmers could be inadvertently suppressing demand for credit from these sectors, according to the office’s latest report, which covers the last nine months of 2017.

John Trethowan, the office’s head, said on Thursday that the number of small and medium-sized businesses borrowing from banks has fallen from about 40 per cent to 23 per cent since 2013.

At the same time, the Economic and Social Research Institute recently warned that Irish small firms were underinvesting in their businesses.

Mr Trethowan pointed out that branch closures have ended the relationship between local bank managers and customers, which was key for smaller enterprises and farmers seeking to borrow money, as their bankers understood their businesses.

“The old relationship management model has gone,” he explained. “I think people are not borrowing because they find it too hard. There’s too much reliance on desktop analysis by banks, based on financial accounts, they don’t understand the borrowers’ businesses.”

Within that group he warned that there was a “subset” of viable farms and businesses whose loans were sold to vulture funds and which faced difficulties in getting finance to allow them pay off those debts.

Vulture funds have the right to take control of farms and businesses that cannot repay the debts or meet the terms demanded by their new creditors.

Mr Trethowan pointed out that the funds were likely to take such steps to realise their investment.

“The funds are getting harder to deal with as well,” he pointed out. “The settlements that they are talking about are not as good as a year ago.”

Mr Trethowan explained that the banks classed any loan where the borrower missed one payment during the recession as being in arrears.

“That allowed the bank to sell the loan as non-performing, even though it did not make them bad businesses,” he said.

One solution is to borrow the cash from elsewhere to pay off the funds, but Mr Trethowan said that this was where businesses ran into problems.

Typically, he said, firms sought 100 per cent of the sum due to the funds, while banks were only prepared to lend them 70 per cent.

Mr Trethowan said the problem was ongoing but was not likely to result in a big bang, with vulture funds swooping to take over large numbers of businesses and farms all at once.

Businesses and farmers refused loans by banks can appeal to the Credit Review Office. Since 2010, 879 enterprises have appealed to the office, which finalised 588 cases and upheld 328 appeals.

The cases completed related to loans worth a total of €94.7 million. The upheld appeals accounted for €49.1 million worth of credit.