Legacy issues to continue to impact financial performance at IFG 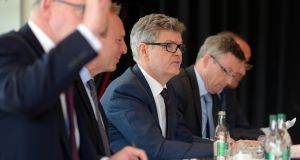 John Gallagher. In his letter to shareholders, the FG Group chairman said the resolution of legacy matters this year and the potential disposal of Saunderson House “may result in some incremental costs in 2018”. Photograph: Eric Luke

Dublin-headquartered but UK-focused financial services group IFG told shareholders on Wednesday that legacy issues in the group may continue to impact its financial performance in the coming year.

The company, which issued a trading update earlier in the year flagging potential costs associated with an investigation by HM Revenue and Customs (HMRC) in the UK, made a loss before tax of £400,000 last year, according to its full year results. That compared to a £6.4 million profit in 2016.

The HMRC investigation into an investment known as Elysian Fuels has a potential maximum exposure for the group of £20 million, IFG said in its review of 2017, which it called a “challenging year for the group”.

In terms of future outlook, in his letter to shareholders, chairman John Gallagher wrote that the resolution of legacy matters this year and the potential disposal of Saunderson House “may result in some incremental costs in 2018”.

“We expect both businesses to continue their growth trajectory in markets that offer strong fundamentals. We are focused on resolving legacy issues that have overshadowed the significant progress we have made in improving both of our businesses, and we believe we are well positioned for improved financial performance in 2018,” he said.

IFG has two units, James Hay and Saunderson House. Assets under administration at James Hay grew by 15 per cent to £25.5 billion last year, while assets under advice at Saunderson House grew by 11 per cent to £5.1 billion. A “fairer charging structure” helping to underpin “a more predictable profit trajectory” aided in adding 6,100 clients to the James Hay arm last year, the group noted. IFG Group has more than 61,000 clients in total.