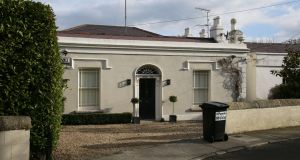 Some six months after moving here to become group chief executive at Bank of Ireland, Francesca McDonagh has bought a home in Dalkey, Co Dublin.

It is understood that Ms McDonagh, an English native who joined Bank of Ireland after spending the previous 20 years with HSBC, has agreed to buy Khyber Lodge on Nerano Road in Dalkey.

The property recently went “sale agreed”, having had an asking price of €1.95 million. The sale is expected to close in the coming weeks.

It is not clear what price Ms McDonagh and her husband have agreed to pay for the home but the purchase will be seen as a signal of her long-term commitment to Bank of Ireland.

Built in 1811, Khyber Lodge is a 255sq m (2,750 sq ft) detached house with four bedrooms and three bathrooms. It went on sale late last year with estate agent Lisney describing the Regency home as being in “turnkey condition”.

Bank of Ireland’s annual report for 2017, published last month, stated that Ms McDonagh had been approved for a mortgage facility of €985,000. The loan had not been drawn down by the end of last year.

The report also indicated that Ms McDonagh is earning an annual salary of about €950,000, in addition to other remuneration of €32,000. She does not participate in the bank’s pension schemes.