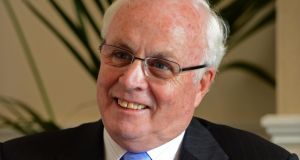 Nama chairman Frank Daly. “Investors will keep an eye on Ireland, with the possibility of further sales from Nama,” the report said. Photograph: Eric Luke

Ireland retained its position as the top European location for distressed loan sales for the fourth year in a row in 2016, driven by Nama’s ongoing wind-down and a large Ulster Bank portfolio sale, according to US investment bank Evercore.

US private equity firm Cerberus was the most active buyer of loans being disposed across Europe for a third straight year, fuelled by its purchase of assets from Nama, Ulster Bank and Permanet TSB.

Some €12.1 billion of Irish loans were sold during the year, making up almost a quarter of the total of €49.9 billion of soured debt sales across Europe, according to Evercore’s latest European Distressed Debt Real Estate Market Report. Still, the level of Irish sales was down sharply from €23.3 billion in 2015.

Billions of euros of Irish loans acquired by private equity and hedge funds in recent years have been placed in ultra tax-efficient special purpose vehicles. The Government moved late last year to restrict the ability of funds to use these vehicles, known as Section 110 companies, to minimise their tax bill on Irish real-estate loan assets.

Loan sales by Dutch-based lenders amounted to €10.4 billion last year, while Italy took the third spot, at €9.9 billion, followed by Spain, at €9.2 billion.

Cerberus’s €9.35 billion of European loan purchases included its €2.9 billion acquisition of Permanent TSB’s remaining UK mortgage book, and a Nama portfolio, known as Project Gem, which had a par value of about €2.7 billion.

Cerberus’s most notable Irish transaction was the 2014 purchase of Nama’s Northern Ireland portfolio, Project Eagle, at a discounted price of about €1.6 billion. That deal is the subject of a number of investigations, mainly around how €7 million of fees linked to the transaction ended up in an Isle of Man bank account of a Belfast lawyer. All parties have denied any wrongdoing.

Fellow US firm Oaktree Capital’s €5.3 billion of loan purchases last year in Europe made it the second-most acquisitive firm, according to Evercore. This, too, was helped by Irish purchases. The company bought two portfolios, Project Ruby and Project Emerald, which had combined loans at a face value of €3.9 billion.

Evercore sees between €50 billion and €60 billion of European loan sales transactions this year.

“Investors will keep an eye on Ireland, with the possibility of further sales from Nama,” the report said. “In addition, it is still to be seen what will happen with AIB’s €9 billion remaining non-core real estate exposure.”

1 We are ‘sale agreed’, but can we go back with a lower offer?
2 Working from home: New costs, new stresses and little relief
3 Eason to lay off 150 staff as it prepares for June reopening
4 Joint accounts: if one of us dies, can the other access the money?
5 ESB shelves plan for €500m electricity generator at Poolbeg
6 HSBC board rethinks overhaul and seeks even deeper cuts
7 Ryanair almost certain to oppose German government’s bailout of Lufthansa
8 Restaurants and gastropubs hope to avoid a dry reopening
9 ‘Over 1,000’ pubs have interest in Covid-19 insurance test case
10 FBD says 700 claims received over Covid-19 interruption
Real news has value SUBSCRIBE