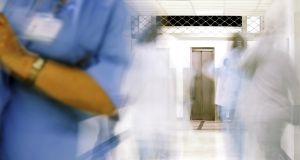 The abolition of the requirement for nurses and other healthcare staff to work additional unpaid hours could cost the HSE about €73 million a year, it has emerged.

The Haddington Road public service agreement provided for a longer working week for staff which generated about five million additional hours for the health service. Nurses have had to work an additional one and a half hours per week without pay under the terms of the deal.

Nurses and other public service groups are expected to press for the abolition of the requirement for them to work these unpaid hours in forthcoming talks with the Government.

The HSE said it was not in a position to set out the exact level of savings realised over recent years on foot of the unpaid hours.

In a reply to a written parliamentary question tabled by Fianna Fáil health spokesman Billy Kelleher, the HSE said: “The current financial systems do not capture the information requested. The shortcomings in our legacy financial systems are well acknowledged and their replacement by a single standard financial system for the health sector is at the core of the finance reform programme initiated by the Department of Health. ”

The HSE said, however, a “substantial exercise” carried out in 2014 had estimated that €72.9 million was saved that year as a result of the unpaid additional hours requirement.