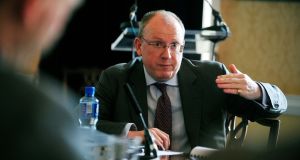 Permanent TSB said its chief operating officer, Toby Clements, is set to leave the bank, making the latest departure among a group of executives who joined a turnaround team hired at the height of the financial crisis.

The news comes as PTSB also said it plans to reorganise its executive committee (ExCo), which is responsible for the day-to-day running of the group.

“I was lucky enough to persuade Toby to return to Ireland from the UK when I joined the bank in 2012 and he has been a key part of my management team since then,” said chief executive Jeremy Masding. “He has made a fantastic contribution to the rebuilding of Permanent TSB and we are indebted to him.”

The departure comes after a series of resignations in 2015, including Glen Lucken quitting as chief financial officer and Jerold Williamson stepping down as head of group risk – both returning to the UK. Meanwhile, group treasurer Paul Byrne left the same year to take up a new role in Australia.

Chairman Alan Cook is set to retire in March. He took up the role shortly after it was revealed in March 2011 the group, then known as Irish Life & Permanent, needed to raise €4 billion – which ultimately came from taxpayers and the sale of the group’s life assurance unit.

The current executive committee overhaul will see the setting up of new roles for director of operations and chief technology officer, and a reshaping of its distribution function to include branch, intermediaries and digital sales

“Our original ExCo was set up at a particularly critical time to deal with the huge challenges then facing the group as it set about its recovery,” said Mr Masding. “ As we’ve made huge progress on that agenda, it’s appropriate to revisit the ExCo structure and ensure that it reflects our current focus which is very much on the commercial agenda and positioning the bank as a key challenger bank in the retail and small SME markets here in Ireland.”