Farmers warn of ‘ugly scenes’ if vulture funds move against them 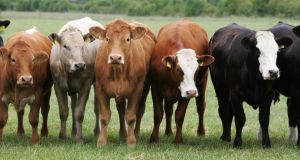 The Irish Cattle and Sheep Farmers’ Association called on farmers not to be panicked by media reports on farm debt. Photograph: Frank Miller

Irish Creamery Milk Suppliers Association president John Comer said people would be making a mistake “if they think there’s going to be no resistance in that area”.

He was speaking in the wake reports that hundreds of distressed farm loans are now controlled by so-called vulture funds, including 200 by US fund Cerberus.

“There is a lot of distress and anxiety out there that we are dealing with an unknown entity. There has been a lot of representation to our office seeking advice on how to proceed,” Mr Comer told RTÉ’s Today with Sean O’Rourke programme.

“People who have generations of a family dealing with a bank now find themselves in a situation where they don’t actually know who they owe the money to,” he said.

Wexford solicitor John Murphy told the programme that people were concerned about the anonymity of vulture funds.

“I saw a letter yesterday where someone was told by a bank that their loan was being taken over by a vulture fund but at the end of the letter was the name of another company that would be managing it,” he said.

“It had gone from bank to a vulture fund, but you can’t contact the bank or the vulture fund – there is a management organisation in charge of it who are based in a warehouse somewhere where you just can’t call in,” Mr Murphy said.

The Irish Cattle and Sheep Farmers’ Association (ICSA) called on farmers not to be panicked by media reports on farm debt.

ICSA rural development chairman Seamus Sherlock said the group had received assurances from senior management at Cerberus “that all strategies where family farms are concerned will be explored”.

“We will not tolerate the vulture-fund approach of stripping assets, with no regard for the family farm,” Mr Healy told members at the group’s annual general meeting yesterday.