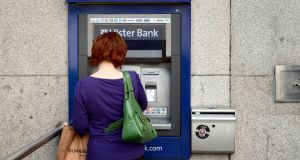 Ulster Bank has implemented controversial new salary ranges for staff ahead of a proposed ballot on pay. Photograph: Brenda Fitzsimons

The Financial Services Union has suspended a ballot on pay among its members at Ulster Bank in the Republic after the company implemented controversial new salary ranges for staff.

This is an unprecedented decision by the union given that the ballot on pay, which involves increases averaging 2 per cent, had already commenced.

It follows Ulster Bank’s decision to implement the salary ranges for new entrants and transfers, with staff told they would be placed in their new ranges by the end of February.

This move had not been recommended by independent mediator Kieran Mulvey in his January 5th document.

In a strongly worded letter sent to the bank on Wednesday, Gareth Murphy, a senior industrial relations officer with the FSU, accused Ulster Bank of acting unilaterally. “This is totally unacceptable, bad industrial relations and serious breach of good faith on the bank’s part,” Mr Murphy said.

He asked the bank to “cease and desist” from implementing the new ranges, and confirm it would engage in “serious and meaningful further discussions” with the FSU.

Mr Murphy requested the bank confirm this by January 23rd, after which the union would resume its ballot. He said failure to confirm this would lead to a “member-driven campaign of active opposition” to the salary ranges.

“We will consider a wide range of potential actions in this campaign. This is a shocking and outrageous step by the bank at a time when staff is extremely disillusioned . . . enough is enough.”

Mr Mulvey’s recommendations noted the issue was contentious. “I am recommending that proposed new reference salaries and ranges should be published to staff at this stage for information,” he stated. “I am not recommending in favour of either position. I encourage further engagement between both parties.”

Last week, Ulster Bank said the new ranges would come into effect “immediately for new staff and where beneficial for the purposes of pay reviews – for other staff it will be 2019 before these changes impact for pay reviews”.