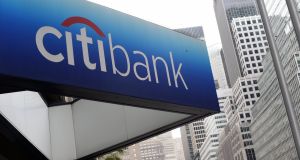 Citigroup’s profit rose 7.1 per cent on a 36 per cent jump in fixed-income revenue, while earnings at New York-based Goldman Sachs more than tripled, with bond trading up 78 per cent. Photograph: Timothy Clary/AFP/Getty

The two firms were the last of the major US banks to report results, with JPMorgan Chase and Co, Morgan Stanley and Bank of America all posting gains as investors placed bets on the direction of interest rates and the economy after the November US election.

Citigroup’s profit rose 7.1 per cent on a 36 per cent jump in fixed-income revenue, while earnings at New York-based Goldman Sachs more than tripled, with bond trading up 78 per cent.

Citigroup chief executive Michael Corbat and Goldman Sachs CEO Lloyd Blankfein have been cutting costs and restructuring management to adjust to stricter capital requirements and a revenue downturn since the financial crisis.

Goldman Sachs’s 2016 revenue was the lowest in five years, though investors and analysts are speculating the firm’s trading operations could be one of the biggest beneficiaries of Mr Trump’s policies.

Goldman Sachs was the biggest gainer in the Dow Jones Industrial Average since the November 8th election, surging 30 per cent through Tuesday.