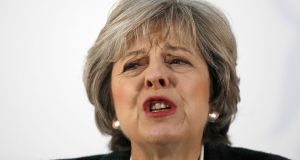 British prime minister Theresa May used her speech to confirm that the UK will not remain a member of the EU customs union. Photograph: Kirsty Wigglesworth/AFP/Getty Images

Sterling staged its biggest advance since at least 1998 on Tuesday as UK prime minister Theresa May pledged to put a deal on the country’s exit from the European Union before parliament.

The British currency, which has been under pressure since the Brexit referendum in June, ended European trading up 2.8 per cent to a 10-day high against the dollar, at $1.2389, as investors digested Ms May’s keenly-awaited speech to foreign diplomats, much of which had been widely leaked before she took to the podium shortly before midday.

“The pound has caught everyone off guard today, with a seemingly counterintuitive rally sparked by the one thing everyone was dreading: a hard Brexit,” said Joshua Mahony, an analyst with online trading firm IG.

Sterling’s rebound from recent selling had already begun before the address, thanks to comments from United States president-elect Donald Trump to the Wall Street Journal, reported overnight, that the dollar was “too strong”. It was helped further by news that UK inflation jumped 1.6 per cent in December, the fastest rate since mid-2014, albeit stoked by rising import costs due to currency weakness.

“Today could well mark the beginning of the end for sterling weakness, for May’s bold approach has put everything out in the open, thus reducing the likeliness of further sterling selloffs each time anything remotely resembling a hard Brexit is brought up,” Mr Mahony said.

Ms May used the speech to confirm that she will not only take the UK out of the single European market but that it will not remain a member of the EU customs union. Still, she set her sights on new “bold and ambitious” free-trade agreement with the EU, free of tariffs.

She also warned that calls from some quarters for the EU to inflict a “punitive deal” on the UK, to discourage other members from exiting, “would be an act of calamitous self-harm” for the union.

David Holohan, chief investment officer at Merrion Capital in Dublin, said: “I think the move in sterling reflects the parliamentary vote confirmation but more so comments made by Trump that the dollar has been too strong. Those comments are sending the dollar meaningfully lower across all currencies.”

Still, sterling also surged 1.7 per cent against the euro, to end the European session at 86.5p, providing some relief to Irish exporters. The rebound follows a selloff in the pound on Monday following weekend reports on the main substance of Ms May’s speech – although they did not reference the parliamentary vote.

Despite its gains on Tuesday, the pound remains about 17 per cent weaker against a basket of other major currencies since the UK voters opted in the June referendum to leave he EU.

The reaction to May’s speech is a marked contrast to those that followed her previous interventions at a Conservative Party conference in October and in a Sky News interview aired on January 8th, both of which triggered drops in sterling.

Over on equity markets, the FTSE 100 declined by 1.5 per cent. It had closed at fresh record highs for 14 straight sessions running through last Friday as the index, dominated by big exporters, was seen as benefiting from sterling weakness.

The Iseq index in Dublin and a benchmark for the wider European markets, the Stoxx 600 index, each dipped 0.1 per cent. However, some Irish companies with large sterling exposure were in demand, with Bank of Ireland gaining 2.1 per cent, while C&C added 1.3 per cent. Businesses voice ‘hard’ Brexit concerns: page 3