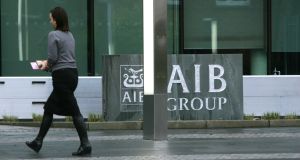 AIB: the bank was valued at €12.2bn by the Ireland Strategic Investment Fund in 2015. Photograph: Cyril Byrne

Minister for Finance Michael Noonan has said “no final decision” on the timing of a stock market flotation of AIB shares has been made by the Government.

But he indicated that there were two windows of opportunity open to the State to sell a stake in the bank this year – in May/June or in the autumn. “So one or the other,” he told Fianna Fáil’s finance spokesman Michael McGrath in response to questions in the Dáil.

Mr Noonan said his advice was that an initial public offering (IPO) was the “optimal route” to recouping the State’s €20.7 billion investment in AIB.

The Minister said a couple of things would need to happen before proceeding with an IPO. These include the payment of a “prudent dividend”, which has been signalled by the bank and is awaiting approval from the European Central Bank, and the publication of its full-year results in March, which would update markets on the performance of the business.

He said the bank had been valued at €12.2 billion by the Ireland Strategic Investment Fund (ISIF) at the end of 2015 but indicated that an update on this could yield a lower figure due to a fall in bank stocks on global markets last year.

It is understood that accounting firm EY is undertaking an updated valuation of AIB for the fund.

Mr Noonan noted that the Department of Finance had appointed three investment banks to act as global co-ordinators on a potential selling syndicate, in preparation for a possible IPO.

“These banks have been appointed for an 18-month period and additional banks will be appointed to fill out the syndicate at an appropriate future date,” he said.

“In order for us to proceed with the sale of any of our banking assets, we would need to be satisfied that the market is prepared to put a fair and reasonable value on the business, bearing in mind its current performance, its future prospects and the outlook for the Irish economy,” he said.

Mr Noonan said his officials would continue to monitor market conditions and the performance of banking equities on an ongoing basis.