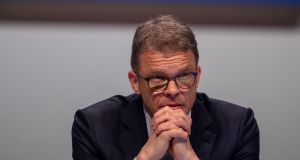 Deutsche Bank’s chief executive Christian Sewing is preparing a radical overhaul of its ailing corporate and investment bank, telling shareholders that the German lender is prepared “to make tough cutbacks”.

Mr Sewing, in charge during a 13-month slide of 40 per cent in the share price of Germany’s largest lender, did not disclose his plans in detail. However, he implied that the lossmaking US equities business would be among the targets.

Investors reacted nervously and shares in Germany’s biggest bank fell 3 per cent to a new record low of €6.42 on Thursday morning.

Speaking to investors at the bank’s annual meeting in Frankfurt’s Messe festival hall, Mr Sewing did not name operations that would be shrunk or outline a timeframe.

In a terse memo sent to employees on Thursday morning, Deutsche’s investment banking boss Garth Ritchie said that “we should be prepared to make further adjustments to improve profitability”, adding that he “recognise[d] the challenges and uncertainty this may bring”.

A person briefed on the plans said, “this will be the most radical reorganisation since Bankers Trust”, referring to the 1999 acquisition of the US investment bank that marked the start of Deutsche’s ambition to become a global investment banking rival to Goldman Sachs and JPMorgan.

Mr Sewing announced the bank was going to merge “parts” of its compliance and anti-financial crime unit, led by Sylvie Matherat, with non-financial risk management, which is overseen by Stuart Lewis. While he did not say who would head the enlarged unit, insiders suggested it was unlikely that Ms Matherat would be in charge.