Public hearings to continue until June 7th, according to Central Bank 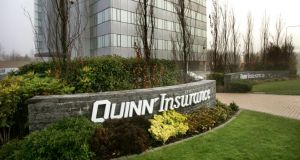 QIL was set up in 1996 by businessman Seán Quinn and went into administration in early 2010. Photograph : Matt Kavanagh

A Central Bank inquiry into alleged regulatory breaches at Quinn Insurance Limited (QIL)will commence public hearings next week. The company collapsed into administration nine years ago before being sold on to Boston-based Liberty Insurance.

In October 2017, two former directors of QIL, Liam McCaffrey and Kevin Lunney, lost a High Court challenge to the Central Bank inquiry into whether they participated in regulatory contraventions between 2005 and 2008, before the firm imploded.

Both men were notified by the regulator in 2011 that it considered it necessary to examine the matter.

Public hearings will commence on May 28th and continue until June 7th, according to a notification published on the Central Bank website on Tuesday. It is understood that all the necessary testimony will be heard during this period.

The expected short phase of public hearings contrasts with a similar public inquiry into Irish Nationwide Building Society (INBS), which began to hear from witnesses early last year and has only concluded hearings into one of seven matters under investigation. The INBS inquiry has been hampered by the ill health of the lender’s former managing director, Michael Fingleton.

Mr McCaffrey and Mr Lunney argued in their failed High Court action that the QIL inquiry process was oppressive and unreasonable. They also questioned its constitutionality. However, the presiding judge, Mr Justice Séamus Noonan, said that their applications were premature and hypothetical and that they must await the outcome of the inquiry before mounting a legal challenge.

The QIL inquiry has been subject to eight case-management meetings since April 2016, with the most recent one occurring at the end of last month. All of these have been held in private.

The inquiry will be led a three-person panel, headed by chairman Mr Justice Iarfhlaith O’Neill, a retired High Court judge. The other two members are Ita Mangan, a barrister, and John Cashin, a former in-house lawyer for Zurich Insurance Group.

QIL, which was set up in 1996 by businessman Seán Quinn, went into administration in early 2010 and subsequently bought by US insurance giant Liberty a year later for a nominal price of €1. It was renamed Liberty Insurance DAC.

The Government had to introduce a 2 per cent levy in 2012 on non-life insurance policies to fill a financial deficit in the Insurance Compensation Fund after the insurer’s implosion. As of the end of 2017, QIL’s administrators had tapped the fund to the tune of €1.133 billion to meet claims and other items associated with the wind-up.

In 2013, the Central Bank fined QIL €5 million in relation to a finding that it had failed between October 2005 and March 2010 to maintain adequate solvency margins and had insufficient internal control mechanisms. The fine was waived because the firm was in administration.