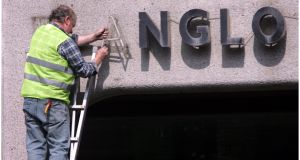 The liquidators of the remnants of Anglo Irish Bank and Irish Nationwide Building Society (INBS) have brought forward the estimated wind-up of the failed lenders by one year to the end of 2021, after they settled a bitter legal battle with the family of businessman Seán Quinn.

The liquidators also said liquidation costs for last year came to €10.8 million, bringing total costs for from February 2013 to €250 million, of which €153.6 million has gone to the KPMG liquidation team. Law firm A&L Goodbody has been the second-biggest recipient of fees, at €37.1 million.

Anglo Irish Bank was renamed Irish Bank Resolution Corporation (IBRC) in 2011 and subsequently merged with INBS. IBRC was put into liquidation in early 2013 under a restructuring of the burden of the lenders’ combined €34.7 billion taxpayer bailout during the financial crisis.

A sixth progress report from IBRC’s liquidators, published on Wednesday, said that the Quinn family’s agreement in March to dismiss all their claims against the bank and consent to a conditional €440 million judgment being registered against them “resolved the largest set of legal cases” the company was involved in.

“Consequently, we have brought the expected timeline for the completion of the estimated wind-down of the special liquidation forward by one year from the end of 2022 to the end of 2021,” the report said, adding that this is dependent on the sale of Quinn-related assets occurring “in an orderly and timely manner”.

The Quinns had originally claimed that Anglo Irish Bank had illegally given them €2.35 billion in loans to prop up a stake in the bank before it failed. An execution of a judgment against the Quinns for €440 million was stayed in April on condition they help secure the return to IBRC of valuable assets in their international property group.

The liquidation update showed that the liquidators were holding €1.25 billion of net cash as of February 9th and that preparations were being made to sell various assets from IBRC’s remaining loan book of €3.5 billion.

The liquidators, Kieran Wallace and Eamonn Richardson of KPMG, said last December that unsecured creditors in the bank would receive the remaining 50 per cent of what they were owed within weeks. The State was the biggest IBRC creditor in this category, and has been paid the €1.2 billion it was owed.

In addition, the liquidators conceded in December that a small group of Anglo Irish Bank junior bondholders, who rebuffed attempts during the financial crisis to make them share the bank’s losses, will recover the €270 million they are owed.

As of February, 13 of 16 customers affected by an industry-wide tracker mortgage scandal have been identified and received refunds and expenses. The liquidators have also been left to deal with 6,245 claims over overcharging by former Anglo Irish Bank business customers.

The Minster for Finance Paschal Donohoe said 12 months ago that the liquidators had indicated to him that the total wind-up costs would come to between €291 million and €306 million.