Trump lashes out at report of Deutsche Bank concerns at transactions 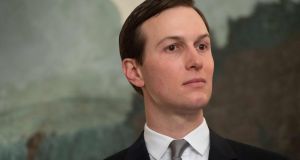 According to the report, compliance executives at Deutsche Bank received alerts about potential illicit activity connected with entities controlled by Mr Trump and Mr Kushner, and recommended that they be sent to the unit of the US treasury department that deals with financial crimes.

But senior employees at the bank ultimately overrode those concerns, and they were not reported, the report states.

Mr Trump’s ties with Deutsche Bank have come under scrutiny since he emerged on the political scene in the United States. The bank was one of the only institutions to lend to Mr Trump during his tumultuous days as a property developer in New York.

Two congressional committees have issued subpoenas to the bank, seeking information about Mr Trump’s affairs as part of their investigations into Mr Trump’s connections with Russia.

Mr Trump and his family sued Deutsche Bank and another financial institution, Capital One, last month, in a bid to prevent the banks from complying with the subpoena requests.

State authorities in New York are also investigating the president’s links with Deutsche.

In a series of tweets on Monday sent from the White House, Mr Trump lambasted the report.

“The Failing New York Times (it will pass away when I leave office in 6 years), and others of the Fake News Media, keep writing phony stories about how I didn’t use many banks because they didn’t want to do business with me. WRONG! It is because I didn’t need money,” he said.

Elaborating further in a second tweet, he said that “when you don’t need or want money, you don’t need or want banks”, noting that banks had “always been available” to him. He also criticised the media for using unnamed sources, though the New York Times article directly quotes executives who worked in the bank.

Mr Trump, who was due to hold a campaign rally in Pennsylvania on Monday evening, also hit out at Democratic presidential hopeful Joe Biden on Twitter.

“Looks like Bernie Sanders is history,” he said, referring to the Vermont senator who is making a second bid for president. “Sleepy Joe Biden is pulling ahead and think about it, I’m only here because of Sleepy Joe and the man who took him off the 1% trash heap, President O! China wants Sleepy Joe BADLY!.”

Mr Biden, who is the front-runner to become the Democratic nominee for president since entering the race last month, kicked off his campaign in Pittsburgh, Pennsylvania and held a major rally in the state’s largest city, Philadelphia, on Saturday.

A native of Pennsylvania, he is seen by many as a candidate who could appeal to white-collar voters in states like Pennsylvania, Wisconsin and Michigan won by Mr Trump in 2016.

Mr Trump has argued in recent weeks that Mr Biden was soft on China during his stint as vice-president under President Barack Obama.

He has also said allegations that Mr Biden’s son Hunter exploited his father’s connections to sign a business deal with Bank of China should be investigated.