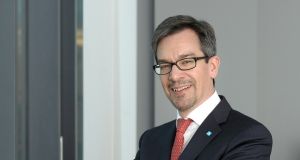 Irish house prices are “a concern”, the chief executive of one of the State’s main mortgage lenders told the Oireachtas finance committee on Tuesday.

KBC Bank Ireland’s Peter Roebben said it has become more difficult for many would-be buyers to secure a mortgage following a surge in values in recent years.

“House prices now are a concern. Affordability for a lot of borrowers is an issue,” Mr Roebben, who took over as head of the bank in April, said in his first appearance before the committee, noting that prices are being driven by demand for properties continuing to outstrip supply.

Irish house price inflation slowed to an annual rate of 3.9 per cent in March from 4.3 per cent a month earlier and 12.6 per cent for the year to March 2018. While values have jumped 82 per cent from their low point in 2013, they remain almost 19 per cent below their peak in 2007.

Dublin prices have declined month-on-month between November and March. While a report from the International Monetary Fund this week said that Dublin experienced the strongest growth in property prices among 32 countries and cities between 2013 and 2018, its forecasting tool has put low odds on a repeat of the property crash.

The Organisation for Economic Co-operation and Development said on Tuesday, however, that the Irish property market remains vulnerable to “rapid changes in prices”.

KBC Bank Ireland estimates that house completions will rise to 22,000 this year from about 18,000, but well short of an estimated 35,000 that the “market could absorb”, said Mr Roebben.

The chief executive said that he supports mortgage-lending restrictions introduced by the Central Bank in 2015.

Mr Roebben reiterated comments made to The Irish Times last week, as the bank reported quarterly figures, that it does not plan to sell problem owner-occupier loans. KBC Bank Ireland sold €1.9 billion of non-performing corporate and buy-to-let loans to US bank Goldman Sachs last December.

Meanwhile, the chief executive said he does not anticipate “material changes” to the level of KBC Bank Ireland borrowers caught up in the industry-wide tracker mortgage scandal.

The bank had acknowledged 3,737 tracker cases as of March and has paid refunds and compensation to 96 per cent of these, said Mr Roebben. The bank is continuing to struggle to track down the remainder.