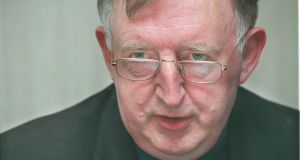 Fexco, founded and led by executive chairman Brian McCarthy, bought 75 per cent of Goodbody eight years ago from AIB in a deal worth €24 million. Photograph: Alan Betson

It didn’t take long. Less than four months after Goodbody Stockbrokers and its majority owner Fexco pulled out of a deal to sell the 142-year-old firm to a Chinese consortium for €150 million, the business is once again in play.

Sources have said a number of parties are in early talks that could see all or part of the business being taken over.

Swedish banking group Handelsbanken may be among them. The Stockholm-based company is known to have been actively looking at acquisitions in the the wealth management market in Ireland. Goodbody Wealth Management has over €7 billion of assets under management or advice.

Spokesmen for Goodbody Stockbrokers and Handelsbanken declined to comment.

Kerry-based financial services company Fexco, founded and led by executive chairman Brian McCarthy, bought 75 per cent of Goodbody eight years ago from AIB in a deal worth €24 million. Goodbody management and staff subsequently doubled their combined holding to 49 per cent under an incentive scheme tied to the original deal.

A Chinese consortium, led by state-backed Zhong Ze Culture Investment Holdings, agreed last summer to buy the entire business, which employs more than 300 people. However, Goodbody management, led by chief executive Roy Barrett, and Fexco decided in January not to proceed with the deal. The Irish side had soured on a transaction as the make-up of the Chinese consortium changed in the months following the agreement.

The wealth management space in Dublin is undergoing a wave of consolidation. UK investment firm Brewin Dolphin moved last week to double down in the Republic by buying the local wealth business of Investec in a deal worth €44 million.

In February, FTSE 100-listed wealth management group St James’s Place struck a deal to buy Dublin-based pensions and investment firm Harvest Financial Services for almost €12 million. Both Investec Ireland and Harvest had been subject to abortive takeover talks in recent years. Could second time prove a charm for Goodbody, too?