Big plans for An Post, INM shareholder ire, and a potential US listing for CRH 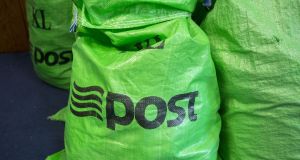 An Post has committed to having a post office within 15km of every community with more than 500 people, and within three kilometres in urban areas. In a deal struck with the Irish Postmasters’ Union after three months of mediation, it is understood that this will result in about 20 new post offices being opened around the State. The State-owned company plans to invest ¤50 million in its network of post offices over the next three to four years in a move designed to modernise its operations and position it to exploit ecommerce opportunities. As part of the plan, to be announced on Friday, all post offices will open during lunch time. Ciarán Hancock reports.

One of the 10 biggest shareholders in Independent News & Media (INM) has urged the company to examine using some of its €90 million cash pile to buy back Denis O’Brien’s 30 per cent stake in the company.

In this week’s Agenda, Simon Carswell reports on the 10-minute chat that rocked INM, while Mark Paul identifies the four main issues at the centre of the ODCE investigation into the firm.

CRH’s chief executive, Albert Manifold, has said the building materials giant is keeping the prospect of a partial or full New York listing of its key US division under review, even after ruling out such a move a number of times in the past. Speaking to The Irish Times this week in his first-ever feature interview, the head of the world’s second-largest building materials group said a share buyback also remained under careful consideration as the company looked at ways to enhance shareholder returns.

Minister for Finance Paschal Donohoe has signalled plans to review pay restrictions across bailed-out banks as they face competition for staff due to Brexit. The move comes as Mr Donohoe pledged to use the State’s 71 per cent stake in AIB to block plans to reintroduce executive share bonuses at the lender next year.

John FitzGerald’s column this week warns how the state’s coffers are vulnerable to tightening of profit-shifting by US corporate giants and argues that we need to be making contingency plans for potential changes to US tax policies.

In our World of Work feature, Olive Keogh has advice on how to raise your profile if you want to get on the headhunters’ radar.

Finally in Caveat, Mark Paul argues that Ireland’s Hidden Heartlands - the midlands to you and I - deserves a bigger slice of the tourism pie.

1 Varadkar resigns amid warning impasse will hit the economy
2 Knock gets visit from world’s largest passenger plane
3 Google completes purchase of Treasury Building for €120m
4 Garda mobile contract win causes concern over Eir’s use of Huawei kit
5 A maverick taking on the Irish whiskey establishment
6 Nineteen staff made redundant by Nama share €1m
7 Billionaire Zara founder and German funds vie for prime Dublin offices
8 How can I view my dead brother’s will if I’m not the executor?
9 Appeals board grants planning for 354 Greystones homes
10 Particle coating process adds layer of innovation to pharmaceuticals
Real news has value SUBSCRIBE