Visa to launch its direct payments product in Ireland in June 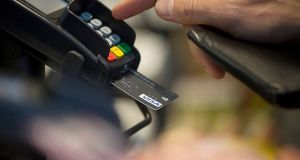 Ireland is set to be the first majority-enabled Visa Direct market in Europe, which means over 80% of cards will be enabled for the service. Photographer: Getty Images

Visa is set to launch its direct payments product in Ireland in June, offering real-time payments to customers through its global systems. The service, which was launched in Europe late last year, allows businesses and consumers to send payments instantly over Visa’s infrastructure.

Ireland is set to be the first majority-enabled Visa Direct market in Europe, which means over 80 per cent of cards will be enabled for the service. It means contractors can be paid instantly, effectively replacing cash in many instances.

The technology can also be used by consumers for person-to-person payments. It could pave the way for peer-to-peer payments in Ireland using Facebook Messenger or another third-party service. That will require partnerships, but Philip Konopik, country manager for Visa Ireland, said the company was open to all parties.

“We expect there will be several players coming not only to Ireland but to Europe as a whole that will be leveraging this technology,” he said.

He said from October the Visa Direct mandate would effectively be across the whole of Europe,

Separately, TransferWise said it had become the first non-bank to get access to a settlement account, allowing it to become a member of Faster Payments. It allows TransferWise to cut out the banks as middle-men, making the process quicker and cheaper for its customers.

Flora Coleman, head of government relations at TransferWise, said the company was now looking to other national banks to do the same.

“The UK payments industry and authorities are working together to deliver on their strategic priority of best-in-class payment services that are efficient, reliable and flexible,” said Bank of England governor Mark Carney. “I am pleased that the first non-bank payment service provider now has direct access to the IK’s payment systems. By stimulating competition and innovation, we anticipate increased diversity and risk-reducing payment technologies will reinforce financial stability while enhancing customer service.”

The announcements were made at the Dublin Tech Summit, a two-day event taking place this week. The summit, which is in its second year, is being held at the Convention Centre Dublin, with just under 6,000 attendees registered for the duration of the event.

The event stepped in to fill the gap left by the Web Summit when it moved to Lisbon two years ago. However, with the Web Summit reaching more than 40,000 in its final year in Dublin, the new event has some way to go before it reaches the same heights.

The event has attracted exhibitors ranging from Visa to Jaguar.

1 Fair Deal nursing homecare leaves little for bills and gifts
2 Portugal set to curb tax breaks for wealthy foreigners
3 Tax and spend: What have FG done for your pocket?
4 Pensions row fix could threaten future of State payment, actuaries warn
5 Pound dips as Bank of England decision looms
6 US budget deficit forecast to blow out by mid-century
7 Court asked to impose maximum disqualification on director
8 Accumulated profits at Kathryn Thomas’s media company rise to €420,000
9 Will the next decade be a better one for value investors?
10 SAP hit by fall in cloud computing orders
Real news has value SUBSCRIBE