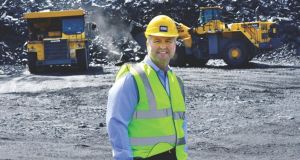 CRH chief executive Albert Manifold: New York listing is “something we keep under review with our advisers”. Photograph: Cyril Byrne

CRH’s chief executive, Albert Manifold, has said the building materials giant is keeping the prospect of a partial or full New York listing of its key US division under review, even after ruling out such a move a number of times in the past.

Speaking to The Irish Times this week in his first-ever feature interview, the head of the world’s second-largest building materials group said a share buyback also remained under careful consideration as the company looked at ways to enhance shareholder returns.

The comments come as CRH’s share price has fallen more than 20 per cent in the last year to languish at about a similar percentage below the average share price target set by 22 analysts covering the stock.

Analysts at Deutsche Bank said last month that there was a growing shareholder interest in CRH pursuing a Wall Street listing of its US division, as it may unlock value in the group as US stocks trade at a premium to European peers. CRH currently has a market value of €23.5 billion.

“In my 20 years in CRH we’ve certainly looked at it a number of times, but every time we’ve looked at it, it has never made sense,” said Mr Manifold. “But we keep an open mind and it’s something we keep under review with our advisers.”

Mr Manifold, who has led the group for the past four years, said that spinning off the North American business, which accounted for more than 60 per cent of earnings last year, into a separate listing would strip away much of the savings CRH makes from procuring goods and services as a group.

“If we put any product or service into a group procurement programme we, on average, save from 2.5 per cent to 3 per cent within three to five years,” Mr Manifold said. “Now, within the US alone, we buy about $14 billion (€11.3 billion) of products and services, all of which go through group procurement.”

With CRH targeting between €120 million and €140 million of cost savings from the integration of two US cement businesses it agreed to acquire last year for a combined $4.25 billion, he said “all of the synergies are going to be delivered by the cement expertise” in the group’s European business.

He said the group was keeping the option of launching a share buyback programme “under careful review”.

“We’ve done it in the past and I suspect we’ll do it again at some stage,” he said. CRH last started a share buyback programme in early 2008, but it was halted later that year as the group sought to conserve capital in the face of the unfurling financial crisis.

Covid-19 has changed the office for good

6 Is owning a home a pipe-dream for the young?

8 IMF says rich countries could use taxes to reduce inequalities

9 How can I be sure an enduring power of attorney will follow my wishes?