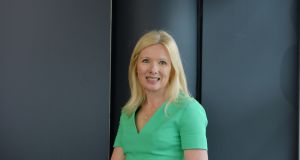 Deutsche Bank chief country officer for Ireland Fiona Gallagher, who has been appointed to the role of global head of the bank’s securities services division. Photograph: Alan Betson

Deutsche Bank has appointed the head of its operations in Ireland, Fiona Gallagher, to the role of global head of its securities services division, putting her in charge of a business in charge of almost €3 trillion of assets.

Ms Gallagher will remain chief country officer for Ireland, where the German banking giant employs 750 people, as she also takes on the global role, which gives her direct responsibility for a further 250 staff. The promotion positions Ms Gallagher as one of the highest-ranking Irish executives in the group.

The bank’s securities services unit provides custody, clearing and settlement as well as securities lending and fund administration services across 30 markets around the world. It had €2.89 trillion of assets under custody at the end of 2016, according to regulatory filings.

Ms Gallagher joined the Frankfurt-based group in 2004, having previously worked with Barclays and Merrill Lynch in London and New York. At Barclays, the executive worked on a number of debt capital market deals for Irish corporations, including State-owned ESB. She was put in charge of Deutsche Bank in Ireland last July.

This week’s promotion came days after Deutsche Bank replaced its embattled chief executive John Cryan, a former investment banker, on Monday with internal retail banking specialist Christian Sewing. The bank has also installed two deputy chief executives, Karl von Rohr and Garth Ritchie, and analysts and ratings agencies said this week that they expected the new team to preside over another round of deep restructuring at the bank, which has been loss-making for three years.

Deutsche Bank, founded in 1870, has been in Ireland since 1991, mainly in the area of global transactions banking, which covers cash management, trade finance, treasury, trust and securities services for global customers. The number of employees in Dublin has more than doubled in the past four years as it expanded its GTB and global technology and operations hubs in Ireland.

While Deutsche Bank has signalled that it will shift business from London to its base in Frankfurt to deal with the fallout of Brexit, “there may be some jobs here or there that come over” to Ireland.