Goldman profit up 27% as trading surges

Resutls mean Goldman is once again a Wall St outlier, but this time in a good way 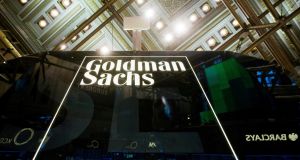 Goldman’s trading desk benefited from increased volatility because of concerns around rising inflation and a potential trade war. Photograph: Reuters

Goldman Sachs Group reported a 27 per cent rise in quarterly profit on Tuesday, driven by a surge in trading revenue due to increased market volatility. It means Goldman is once again a Wall Street outlier – but this time in a good way.

Like other banks Goldman’s trading desk benefited from increased volatility because of concerns around rising inflation and a potential trade war. Goldman’s trading revenue rose 30.5 per cent to $4.39 billion from the year-earlier quarter, when revenue fell 2 per cent because of the bank’s large exposure to commodities.

Goldman’s 23 per cent increase in fixed-income trading revenue was in sharp contrast to that of larger rivals. JPMorgan Chase & Co’s fixed income revenue was flat, while at Citigroup’s it fell 7 per cent.

Results from the first three months of this year are helping erase bad memories from 2017, which included the worst annual commodities performance in Goldman’s 19-year history as a public company.

The first-quarter trading gains contributed to the highest revenue in three years and profit that surpassed analysts’ expectations. The trading struggles in 2017 raised questions about the bank’s strategy and led to admissions that the firm had not focused enough on corporate clients. Chief executive Lloyd Blankfein has maintained that many of the issues in the firm’s biggest business are cyclical and would improve with more active markets. Goldman benefited from a return of volatility to equity markets in the first quarter.