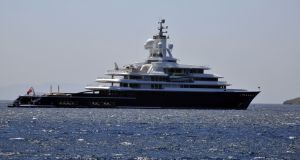 The 377-foot Luna, docked in Dubai, is the second-largest expedition yacht in the world, and comes with two helipads, nine decks, a swimming pool and a mini-submarine

A Russian oil billionaire has been ordered by the High Court to transfer a £350 million (€400 million) luxury superyacht to his ex-wife in the latest twist in one of Britain’s biggest divorce battles.

The 377-foot Luna, docked in Dubai, is the second-largest expedition yacht in the world, and comes with two helipads, nine decks, a swimming pool and a mini-submarine. It was built for Roman Abramovich, the Russian oligarch, but sold to Farkhad Akhmedov, an Azeri-born billionaire, in 2014.

Mr Akhmedov’s name was included in the so-called ‘Kremlin report’, a list of 220 Russian politicians and businessmen close to President Vladimir Putin issued by the US Treasury in January. He built up his wealth through Northgas, the Russian energy group, before selling his shares in the company for $1.37 billion in 2012.

The 377-foot Luna, docked in Dubai, is the second-largest expedition yacht in the world, and comes with two helipads, nine decks, a swimming pool and a mini-submarine

The billionaire met his wife, Tatiana, while she was studying in Moscow and the couple married and moved to London in 1993. Their marriage ended in 2014 and he was ordered to pay her a divorce settlement of £453.5m - about 41.5 per cent of their £1bn fortune - in December 2016.

Since then, Ms Akhmedov has been involved in litigation around the world to try to enforce the ruling and recover assets belonging to her former husband. The High Court was told earlier this year that he has yet to give her any money.

On Thursday, the High Court in London issued further court orders in favour of Ms Akhmedov. It ruled that Mr Akhmedov “had taken numerous elaborate steps to conceal his wealth”.

Mr Justice Haddon-Cave ruled that Mr Akhmedov “is acting with real impropriety and deliberately seeking to evade his legal obligations” to his former wife and was “concealing his assets in a web of offshore companies”.

He ordered that Luna, which has a capital value of £350 million, and which is now “effectively impounded” in Port Rashid, Dubai, should be transferred to her name. The High Court ruling will be taken to the Dubai court, which will decide on implementation of the orders.

When Withers, the law firm representing Ms Akhmedov, discovered in October last year that the yacht had sailed into Dubai for maintenance, it obtained an injunction from a Dubai court against the corporate entities which owned the vessel.

In March, Ms Akhmedov applied to the High Court in London asking to take control of the yacht, arguing that the Liechtenstein and Panamanian entities that owned it were controlled by her former husband and were being used by him to avoid paying the settlement.

Her legal team said in a statement it was pleased at the ruling.

Mr Akhmedov said in a statement that the High Court ruling “lacks any legal validity” in Dubai. He claimed it would have no bearing on a separate appeal about the yacht going through the Dubai courts next month. – Copyright The Financial Times Limited 2018