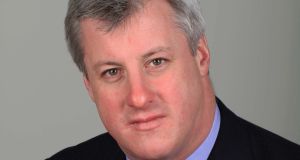 Former Paddy Power chief executive Patrick Kennedy has been named as the new chairman of Bank of Ireland.

Bank of Ireland has appointed Patrick Kennedy, former chief executive of bookmaker Paddy Power, as its next chairman, from the end of July.

Mr Kennedy (49), who led Paddy Power between 2006 and 2014, joined Bank of Ireland’s board in 2010 and became deputy governor three years ago. He will succeed Archie Kane, who signalled in February that he was stepping down from the role that he had held for the past six years.

The appointment comes as Bank of Ireland’s new chief executive, Francesca McDonagh, puts her stamp on the group and prepares to unveil a series of medium-term financial targets at a day for investors and analysts in June. Ms McDonagh, a former HSBC executive, succeeded Richie Boucher last October. The group is also in the middle of a €900 million information technology overhaul.

The Irish Times reported late last month that the bank is seeking to cut 15 per cent of its managers and executives, which may result in the elimination of 200 roles. Bank of Ireland has also seen a number of senior executives depart or signal plans to exit the group in the past eight months.

“We are very grateful to Archie for his service to Bank of Ireland since his appointment in 2012 and continuing until the end of July,” said Bank of Ireland senior independent director Patrick Haren.

During Mr Kane’s time as chairman, Bank of Ireland repaid its €4.8 billion taxpayer bailout, exited a government guarantee scheme and, most recently, outlined plans to pay its first dividend in a decade in the coming months. The State continues to own a 14 per cent stake in the bank.

“Patrick combines a deep knowledge of the bank with exceptional commercial acumen gained from a highly successful career in national and international business,” Mr Haren said of Mr Kennedy.

Mr Kennedy, an accountant by background, previously worked as chief financial officer at Greencore and is the son of David Kennedy, former chief executive of Aer Lingus and one-time deputy governor at Bank of Ireland.

Mr Kennedy is also chairman of CarTrawler, the Dublin-based company that makes software used by airlines and travel agents to connect to car hire firms.