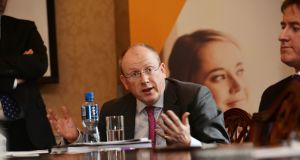 Permanent TSB’s (PTSB) planned sale of €900 million of “split mortgages” will expose borrowers to the whims of overseas investment funds, as contracts underpinning such arrangements allow the lender to terminate the accord at will, the Oireachtas finance committee heard on Thursday.

As of the end of December, PTSB has restructured some 6,157 troubled owner-occupier loans as split mortgages, where repayments of interest and principal on part of the loan are put off to a future date, subject to a review every three years.

The bank has earmarked some 4,300 of such loans, amounting to €900 million, for sale as part of a €3.7 billion non-performing loans (NPLs) portfolio disposal it is planning as it seeks to cut its NPLs ratio – under regulatory pressure – from 26 per cent to the European Union average of about 5 per cent over the medium term.

Members of the committee, including Fianna Fáil TD Michael McGrath and Fine Gael senator Kieran O’Donnell, noted that PTSB split-mortgage contracts they have reviewed contain clauses that would allow the bank to terminate the agreement as it sees fit, subject to applicable law.

McGrath said a so-called vulture fund would be “far more likely” to trigger that clause than a mainstream lender.

In addition, PTSB’s chief risk officer, Stephen Groarke, said it would be “highly unlikely in our view that if we or a fund took a unilateral decision” to rip up a split-loan arrangement that it would be supported by the courts.

The inclusion of split mortgages has emerged as the most politically contentious part of the PTSB’s planned portfolio sale. Such loans are currently classified as NPLs according to European Central Bank’s bank supervision arm.

Mr Groarke said the bank had been in talks with the ECB since early 2017 about the possibility of reclassifying split mortgages as performing loans, which could allow the bank to pull these from the loan sale. The ECB has not yet delivered its formal view on the matter, he said.

The remainder of the loans on the market include buy-to-let mortgages, loans where previous restructuring arrangements have failed, where the bank has not been able to come up with a viable solution for borrowers and cases where customers have not engaged with PTSB.

Group chief financial officer Eamonn Crowley said the number of potential buyers circling Project Glas was “on two hands, if not more”, with indicative first-round bids due within the next month or two. The bank aims to conclude the sale by the end of the year, with affected customers not due to find out that their loans are transferring until 60 days before the transaction closes.

Mr Masding said PTSB’s depressed share price reflected market concerns about its ability to resolve its NPLs problem. Based on money returned to the State to date and the bank’s current market price, it currently has a €500 million “gap” to be bridged to repay its entire €4 billion crisis-time bailout, the chief executive said.