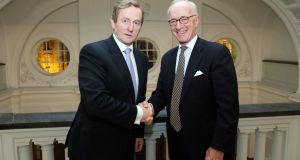 Taoiseach Enda Kenny and Mayo Renewable Power’s Gerald C Crotty: launching the ill-fated wood-chip burning electricity generator in Killala which was to cost up to €200 million.

The High Court has moved to put a biomass-fuelled power plant under construction in Co Mayo into liquidation after efforts to come up with a rescue plan for the insolvent company, with €125 million of debts, failed.

The court appointed Michael McAteer of Grant Thornton on Wednesday afternoon as liquidator to Mayo Renewable Power, which initially sought court protection from its creditors under examinership in August.

Mr McAteer, who was appointed examiner in September to the company, was subsequently unable to come up with a workable so-called scheme of arrangements to secure the company’s future and was duly tasked with liquidating the firm. The liquidator will now seek to sell the company’s assets.

Declan Murphy, for Mr McAteer, said it had been hoped investment could be secured to continue the construction but, despite efforts to secure an investor, it was clear as of last Friday a number of parties which had expressed an interest were no longer interested.

US-backed Mayo Renewable, which was officially launched last year by Taoiseach Enda Kenny, had plans to build a wood-chip burning electricity generator in Killala at a cost of up to €200 million. The project was half-completed when work ceased in July as the project ran into a funding shortage.

All told, Mayo Renewable has about €95 million of secured debt and a further €30 million to trade creditors. These include its main contractor, John Sisk & Son, and French environmental services group Veolia, which had secured a 15-year contract to operate the planned 42.5 megawatt power plant, capable of producing enough electricity to supply 68,000 homes.

The power project, first mooted in Co May more than a decade ago, had supported 350 jobs when it was under construction. Promoters of the plant had said it would create 130 new jobs when operational, with the potential to create a further 1,000 jobs in the Irish biomass market.

The company had lined up as much as €118 million of debt funding from a group of banks, including Ulster Bank, AIB and Barclays, that was to be paid in stages.

The firm’s financial difficulties commenced last year when it cancelled an order to design and supply a boiler, a critical component in the plant, from a supplier, the court heard previously.

Consent from the lenders was required to secure a new supplier but the consents were not obtained and Barclays said last May its lending commitments under the original loan agreement had lapsed. While talks continued with Ulster Bank and AIB, commercial terms could not be agreed. Additional difficulties were caused when a damages claim for $60 million was brought in the US courts against the company and others.

1 Digicel warns of Covid-19 hit after first earnings rise in years
2 How to further divide the economy using the wage subsidy
3 Panama Papers: The secret offshore world of the elite
4 Could your old car be giving away all your secrets to its new owner?
5 VAT cuts are for businesses – consumers will still pay the same
6 Why are markets booming when a crash is on the way?
7 Lifewave’s miraculous patches don’t keep the dreaded taxman away
8 Help, I’ve no PRSI stamps – can I still get a pension?
9 CRH to proceed with $3.5bn acquisition of US cement maker Ash Grove
10 Albion profits fall
Real news has value SUBSCRIBE