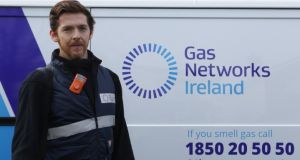 Gas Networks Ireland is due to redeem €500m of bonds, which carry a coupon of almost 3.63%, in April.

Ervia’s Gas Networks Ireland unit sold €625 million of bonds on Monday as it lines up its finances ahead of a major debt repayment in April.

The company, a sister to Irish Water, placed €500 million of bonds that are due to mature in 10 years and a further €125 million of 20-year bonds, according to market sources.

The transaction marked the first bond sale under the company’s new corporate structure since its parent sold off its Bord Gáis Energy division in 2014 for €1.1 billion to a consortium led by UK power group Centrica. The Bord Gáis group was subsequently renamed Ervia.

Gas Networks Ireland is due to redeem €500 million of bonds, which carry a coupon of almost 3.63 per cent, in April.

Joseph McGinley, a bond analyst with Davy, said “strong” investor demand for the bonds “secures the company’s financing needs for the medium term”.

However, the sale comes as bonds globally are falling out of favour with investors, with yields having increased in particular this month following Donald Trump’s election as US president.

For example, fellow State-owned energy group ESB has seen the yield on 15-year bonds it sold in May rise from a low of a little over 1 per cent in July to 1.735 per cent.

Euro zone bonds were in particular demand during the summer as the European Central Bank began to buy up such debt as part of its massive quantitative easing programme aimed at stimulating inflation and the wider economy.

The ratings firm said this reflected the company’s low-risk business model and the fact that its gas transmissions and distribution activities operate under a transparent and predictable regulatory regime.

A bond prospectus for Gas Networks Ireland highlighted that is entirely ringfenced from Irish Water and is not allowed to transfer funds to its sister company.

The European Union’s statistics agency Eurostat ruled last year that Irish Water’s liabilities must be accounted for on the State’s balance sheet.