Government criticised for failing to act on climate change 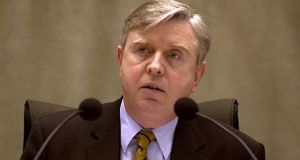 Former European Parliament president Pat Cox was speaking at the Sustainability Gathering conference in Dublin, which was hosted by Sustainable Nation

The Irish Government has still to wake up to the reality of climate change and is now lagging behind its peers in Europe in tackling the issue, the former head of the European Parliament Pat Cox has claimed.

Addressing a conference on sustainable energy in Dublin, Mr Cox was critical of the Government’s climate policy, suggesting it was “more ambitious in its verbalisation and than in its delivery”.

He highlighted a recent report by the Environmental Protection Agency, which found greenhouse gas emissions were rising in almost every sector of the economy.

“If we park the sensitivities about agriculture, we still have an underlying problem in energy, transport and waste . . . in every sector we look at emissions are going up,” he said.

Mr Cox claimed Ireland would probably have already breached its 2020 targets but for the recession, which temporarily and inadvertently pushed the State back in line with EU targets.

He was speaking at the Sustainability Gathering conference in Dublin, which was hosted by Sustainable Nation, a new body aimed at promoting clean-tech initiatives.

Given the challenge posed by climate change, Mr Cox said the Government needed to look not at incremental change but at transformative change.

France and Germany, the two largest mainland economies in Europe, have already reduced their emissions levels to below 1990 levels, while Ireland is unlikely to achieve this even by 2020.

On the new 2030 targets, Ireland managed to secure a more lenient target of reducing emissions by 30 per cent relative to a 2005 baseline primarily on account of the State’s relatively large agricultural sector, which is Ireland’s largest carbon emitter. This followed months of behind-the-scenes lobbying by Irish ministers.

In his address, Mr Cox highlighted that not one Irish city had signed up to the Compact of Mayors initiative on climate and energy, which already had 607 participants.

He also noted that Dublin Bus was recently refused funding to trial cleaner vehicles while an equivalent company in Paris had already begun the process of changing its entire fleet to electric vehicles.

While Germany has already formulated its 2030 mitigation plan, which includes a provision to cut transport emissions by 40 per cent on 2016 levels, Ireland has had no plan since 2012.

“In line with Climate Action and Low Carbon Development Act 2015, a national mitigation plan is now under preparation and a draft preliminary plan will be published for public consultation in the coming weeks,” a Government spokesman said.

He said 20 years ago investment in renewables was seen as part of a company’s corporate social responsibility strategy whereas now it is a commercial imperative.

Mr Hunt also referred to a letter in the Financial Times from more than a 100 well-known company heads calling on US president-elect Donald Trump to reconsider his stated opposition to the climate change agenda.