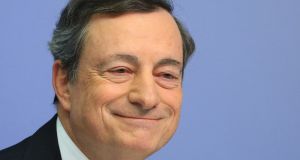 The European Central Bank has warned that a Fianna Fáil Bill aimed at giving the Central Bank powers to limit variable mortgage rates would further hit competition and may force banks to push up the cost of other types of loans.

Responding to a request from Taoiseach Enda Kenny and chairman of the Oireachtas Committee on Finance John McGuinness for an opinion on the Bill, ECB president Mario Draghi said the draft law would lead to a number of unintended consequences and damage the credibility of the entire Eurosystem.

“Imposing administrative controls could potentially affect the rates offered by lenders for other types of bank credit,” according to the 15-page opinion, dated November 17th and signed by Mr Draghi.

The latest Central Bank data shows that while the average rate on new mortgage agreements fell by quarter of a percentage point to 3.43 per cent in the year to September, the euro area equivalent rate was 1.78 per cent.

Banks have argued that Irish costs remain higher because they face higher funding costs as a result of the crisis, must hold higher levels of provisions against bad loans and the fact that they have large portfolios of unprofitable tracker mortgages.

While the Bill passed through an initial stage in the Dáil in May without a vote, Minister for Finance Michael Noonan warned it might be unconstitutional and the Central Bank did not want the power to regulate interest rates.

“The ECB seems to have little regard for the plight of ordinary consumers and completely ignores the fact that Irish mortgage consumers are being denied the benefit of ECB monetary policy,” said Fianna Fáil finance spokesman TD Michael McGrath.

“There has been progress on the variable rates charged by some banks and the progression of this Bill has undoubtedly helped in applying downward pressure on rates.”

The ECB cut its main rate to zero, its lowest ever, in March amid efforts to reboot inflation and the euro-area economy.

The draft law would require the Central Bank to carry out at least quarterly assessments of variable mortgage rates and where it deems that a “market failure” exists, where a lender is charging more than what the regulator deems reasonable and justified, it could direct the bank to pull back its rate.

The Bill would also ban bank practices where they charge different rates to new and existing customers.

The Oireachtas Committee on Finance is awaiting legal advice on the Bill and will meet with the Central Bank in Dublin next month to discuss it further, said Mr McGrath.

The Central Bank declined to comment on Friday on the ECB’s opinion.

Mr Draghi said the draft law does not seek to promote competition in the market or address other possible root causes influencing variable rates in Ireland, such as their large tracker portfolios, where borrowers are paying “considerable below” the euro area average, high amount of non-performing loans and low level of repossessions.

Capping rates “could potentially render the market less attractive and discourage new entrants. This would lead instead to lower competition in financial services in Ireland, effectively defeating the purpose of the draft law,” he said.

“The ECB would like to emphasise that extreme caution should be exercised when transferring the power to take commercial decisions from market actors to public authorities.”

The ECB president also warned of potential conflicts of interest between the task expected of the Central Bank under the new Bill and the bank’s monetary policy and financial stability responsibilities.

This could impact on independence of the Central Bank and its governor, Philip Lane, he said.

“This could, by extension, potentially damage the credibility of the CBI [Central Bank of Ireland], the ECB and the Eurosystem as a whole,” he said.