Settlement subject to payment being made to O’Brien’s Kendrick Investments, court hears 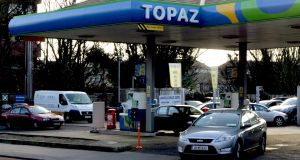 Kendrick Investments held 99 per cent of Topaz prior to its sale to Couche-Tard. Photograph: David Sleator

Denis O’Brien and Alimentation Couche-Tard, the Canadian company to which he sold the Topaz chain of forecourts for €258 million cash, have agreed a settlement of their legal row over payment of a portion of the consideration.

Kendrick Investments, an Isle of Man company controlled by Mr O’Brien, and Circle K Holding Ireland, an Irish company owned by Couche-Tard, have told the Commercial Court the case is settled subject to a payment being made.

Senior counsel Rossa Fanning, for Kendrick Investments, told Mr Justice Brian McGovern on Monday that the case could be adjourned on consent for mention in two weeks to facilitate the agreement. The judge made the order.

Kendrick, which owned 99 per cent of Topaz prior to the sale to Couche-Tard, had alleged that Circle K wrongly withheld a €4.7 million portion of the sale price due to Mr O’Brien’s company. The portion corresponded to former Esso assets at Dublin Port bought by Topaz when it was owned by Mr O’Brien.

Kendrick demanded payment of the €4.7 million on September 23rd last, but Circle K failed to pay the balance and raised a “wholly unmeritorious” breach of warranty claim, it was alleged by Kendrick.

In correspondence, it was suggested by Circle K that Kendrick had failed to disclose details of the financial situation relating to the Esso Group, Kendrick director Dermot Hayes told the court in an affidavit filed several weeks ago.

Mr Hayes said the breach of warranty claim was “spurious” and said it was clear the issue Circle K had complained about was “appropriately disclosed prior to the completion of the transaction”.

Mr Hayes said Circle K had agreed to pay Kendrick €7 million under the “Dublin Port additional consideration”, relating to a February 2016 lease for certain premises at Dublin Port and a retail lease that was not to be terminated before August 2017.

The Dublin Port consideration was satisfied and the €7 million became payable, less an agreed €480,000 related to working capital, he said.

While Circle K had paid some €1.8 million in September 2013, the remaining €4.7 million was allegedly still owing, but the agreement announced on Monday appears to have settled the matter.

The Topaz sale, which included a network of 444 filling stations, convenience stores and fuel depots, officially closed on February 1st, according to stock market filings by Couche-Tard.

Mr O’Brien and his nephew Emmet O’Neill, the chief executive, resigned as directors on that date.