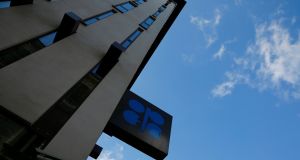 The Opec building in Vienna. Saudi Arabia said that Opec needed to sort out its differences.

Opec was trying on Monday to rescue a deal to limit oil output as tensions grew among the producer group and non-Opec member Russia, with top exporter Saudi Arabia saying markets would rebalance even without an agreement.

Opec experts started a meeting in Vienna on Monday morning and were due to make recommendations to their ministers on how exactly the Organisation of the Petroleum Exporting Countries should reduce production when it meets on November 30th.

Meanwhile, the Algerian and Venezuelan oil ministers were to travel to Moscow on Monday and Tuesday in a final attempt to persuade Russia to take part in cuts instead of merely freezing output, which has reached new highs in the past year.

In September, Opec, which accounts for one-third of global oil production, agreed to cap output at about 32.5-33.0 million barrels per day versus the current 33.64 million bpd to prop up oil prices, which have more than halved since mid-2014.

The meeting on November 30th was expected to rubber-stamp that deal, with Russia and some other non-Opec producers such as Azerbaijan and Kazakhstan also contributing.

But doubts emerged in recent weeks as Opec’s No 2 and 3 producers, Iraq and Iran, expressed reservations about the mechanics of output reductions and Saudi Arabia voiced concern about Russia’s willingness to cut.

On Friday, Opec cancelled an experts meeting with non-Opec producers scheduled for November 28th after Saudi Arabia said the organisation needed to sort out its differences first.

Over the weekend, Saudi energy minister Khalid al-Falih said oil markets would rebalance even without an output-limiting pact. That contrasted with his previous statements, in which he had said Riyadh was keen for a deal.

Doubts about Opec’s ability to deliver promised cuts sent Brent crude down 2 per cent initially on Monday to less than $47 per barrel, though prices later recovered.

Some analysts including Morgan Stanley and Macquarie have said oil prices will correct sharply if Opec fails to reach a deal, potentially going as low as $35 per barrel.

As Opec experts turned up at the group’s headquarters on Monday, one delegate who had previously stated that a deal would be done, said this time: “I am not sure.”

Another delegate, when asked about the prospects for a deal, said: “Nobody knows yet.”

Opec ministers started arriving in Vienna on Sunday for the group’s regular twice-yearly talks but Saudi Arabia’s Falih was not expected to land before Tuesday evening, leaving little time for traditional pre-meeting discussions with peers.

Iranian semi-official news agency MEHR published an editorial on Sunday accusing Saudi Arabia of declaring a new “war on oil prices” and reneging on its promises to limit output.

The tone contrasted with Iranian news agencies’ more upbeat coverage of Opec’s informal meeting in September in Algeria, when the initial deal was reached.

Countries that fail to attract immigrants will lose out – Microsoft chief 12:07
Long-hyped smart fridges will never run out of milk or data 12:02
State subsidises public sector retirees to cover gap until State pension 11:57
Trump holds America up as ‘example for the world’ at Davos 11:57
My father in a nursing home wants to gift me his house 11:23

1 Who are Ireland’s 17 billionaires?
2 State subsidises public sector retirees to cover gap until State pension
3 My father in a nursing home wants to gift me his house
4 Richer countries must do more to tackle climate change, Thunberg tells Davos
5 Nama lends Cosgraves €15m to fund huge apartment development
6 Insolvency arrangement approved for man with €60 million in debts
7 Health insurance: Switch often for your financial wellbeing
8 Are there annual limits on inheritances or gifts to a child?
9 Property firm sues engineering company over waterproofing of basement
10 Teenage Clicks: Why we should be concerned about addictive smartphone apps
Real news has value SUBSCRIBE