Oil at three-week high ahead of Opec decision on output 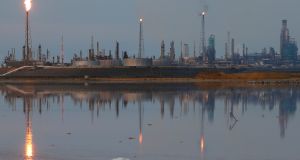 An oil refinery in Venezuela. Opec would like a deal to limit output. Photograph: Carlos Garcia Rawlins/Reuters

Oil prices rose more than 3 per cent to a three-week high on Monday, catching a lift from a weaker dollar, as major oil producing countries appeared to be moving closer to agreeing to limit output.

Brent crude oil has risen 11 per cent in a week since Saudi Arabia, the de facto leader of the Organisation of the Petroleum Exporting Countries, started a diplomatic charm offensive to persuade the group’s more reluctant members to join its proposed output plan. Opec members are due to agree a world oil freeze pact with non-Opec countries on November 30th.

In the last several days, several members of the group, including Iran, along with non-member Russia, have suggested they are likely to agree to a deal to limit output.

“When you’ve got all of the major players on board with a production cut, obviously you’re very close to getting a deal done,” said Phil Flynn, senior market analyst at Price Futures Group in Chicago.

“You never know with Opec – sometimes they go to the last minute and there are a lot of false starts.”

Goldman Sachs analysts said in a note that the odds of an Opec cut succeeding have increased, and believe the global oil surplus will shift into a deficit by the middle of next year, which would support prices.